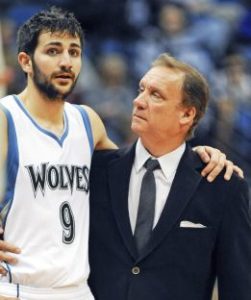 The easy thing for the Saunders family to do would have been to walk away.

Flip Saunders’ fingerprints are all over the Minnesota Timberwolves – from the players on the roster to the new scoreboard that hangs in the arena. One year after his death, his presence is still a strong one at Target Center, and it would have been understandable if his family would have wanted to step back from the organization while grieving the loss of their patriarch.

Ryan Saunders could have easily found another coaching job. He didn’t. He is still here, coaching the roster that his father had such a critical role in assembling.

Rachel Saunders could have found another job in the corporate world. She didn’t. She’s still here, working as manager of team services for the front office that her father rebuilt from the ruins of the previous regime.

Debbie Saunders could have retreated to her home in the Minneapolis suburbs, avoiding the place her husband devoted so much of his time to restoring. She didn’t. She bought four seats just behind the Timberwolves bench so she could be there to watch the young men Flip drafted, traded for and signed continue to grow up in front of her eyes.

”I was nervous to go back in there this year because time has passed and life goes on,” Debbie Saunders told The Associated Press. ”The minute I got back in there, it felt right again. It’s obviously different, but some things are the same.”

They are a basketball family that has endured a crushing loss. Flip Saunders died on Oct. 25, 2015 from complications related to Hodgkin’s lymphoma. He was one of Minnesota’s most beloved sports figures, a gregarious and outgoing coach and salesman who turned one of the NBA’s woebegone franchises into a family reclamation project.

His death rocked the organization, sent tremors across the league and shook the very foundation of a tight-knit family that includes daughters Kimberly and Mindy, who sit right next to their mother at the games to this day. A year later, they have endured many of the firsts that make moving on so difficult.

But one thing is clear: the Saunders family isn’t going anywhere.

He is working under Tom Thibodeau now, providing some continuity for a new regime. Thibodeau was one of the most sought-after coaches in the league this summer, and he jumped at the chance to come to Minnesota thanks in large part to the promising young core that Flip and his staff assembled.

”He was such a great guy and we all miss him,” Thibodeau said. ”I had spoken with him a few times and I had a pretty good idea of what he was trying to do. It was a well thought-out plan. He did a great job selecting Karl (Towns) and Andrew (Wiggins) and Zach (LaVine) to build the future with. The vision for the organization was real good.”

The family has also established the Flip Saunders Legacy Fund, dedicated to giving back to the community. They have already helped disadvantaged kids with meals over the summer, held a basketball clinic in Flip’s hometown of Cleveland and will work to refurbish some basketball courts that have fallen into disrepair.

While they are putting all of that into motion, Debbie will keep coming to Target Center to watch the pups Flip picked grow as Wolves.

”As a mom, as Flip’s wife, I kind of feel a sense of duty to them, too, to be there and support them,” she said. ”Because I know that’s what Flip would’ve wanted. And it feels right to do that.”

One might think it would be painful to return to a place with so many stark reminders. But the family has found comfort in familiarity. They noticed when Memphis Grizzlies coach David Fizdale wore a ”FLIP” pin in the preseason game last week, take heart in the hugs they get from ushers and security guards who have known them for years.

And as difficult as this past year has been for them, there are still moments of light. Debbie smiled this week thinking about the World Series, pitting Flip’s Cleveland Indians against her hometown Chicago Cubs.

”It’s kind of a house divided and I can’t help but chuckle over that because I was so happy for Flip that the Indians got there,” she said. ”But now I’m like, `Oooh, as a Cubs fan, boy Cubs fans have been waiting for this for so long.”’

Target Center is being renovated right now, and Flip played a big role in the new design. When Debbie first walked into the arena last week, she looked up toward the rafters and saw that a glowing moon that had been there for years had been replaced by a video screen.

”He never gave me an explanation. But now it’s gone and it’s a screen there. There’s some things that actually made me smile.”

One year later, and Flip Saunders is still getting things done.