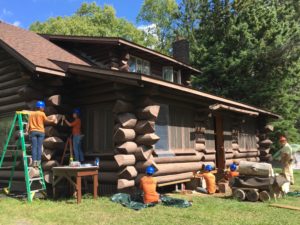 If you’re on the North Shore this weekend, consider visiting the historic Ranger’s House at the Tofte Ranger Station during Sunday’s open house from 11am to 1pm. Lee Johnson with the U-S Forest Service says it was built by C-C-C members in the winter of 1935-36 during the Great Depression.  Johnson says it’s “really impressive craftsmanship. Big 16-, 18-inch logs, red pine logs, that were harvested locally, and kind of an Adirondack craftsman-style, bungalow-style. Really beautiful building.”

If you can’t make it to Tofte Sunday, keep an eye out for other Depression-era buildings in state parks and waysides across Minnesota that are still giving good service three-quarters of a century after they were built.  Johnson says they’re the work of the Civilian Conservation Corps, one of F-D-R’s programs during the Great Depression.  The C-C-C put thousands of unemployed young adults to work on conservation projects, many of which still endure in Minnesota and around the nation.