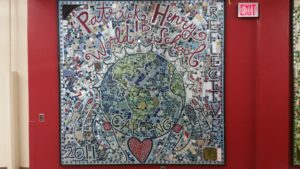 It’s the final hour of the school day and students are making their way into Mr. Hofmann’s Choir class at Patrick Henry High School in north Minneapolis). After Mr. Hofmann makes a few announcements and asks for permission slips for an upcoming concert, artist in residence, Courtland Pickens starts the rehearsal off with a song called “Optimistic”.*  There’s a joyous feeling in the room as the kids are singing. It’s a far cry from what many of us might expect from the heart of north Minneapolis, where most of what we know about the area is what we see in the news about the latest robbery, fire, murder or protest. The kids in Mr. Hofmann’s class are here to sing and learn and laugh. Courtland Pickens says he’s here on a sort of mission.

If you take Courtland’s advice and close your eyes, without the usual distractions and other outside noise that is so often a part of our daily lives, you’ll likely hear there’s harmony here in the choir room at Patrick Henry High School. And the students and their mentors here are hoping the sound they’re making together resonates and rises above the perceptions so many of us have about north Minneapolis.

*Written by Gary Hines, Terry Lewis and James Samuel Harris III -aka Jimmy Jam and Terry Lewis. The song was recorded and performed originally by local artists Sounds of Blackness in 1991.