You are here: Home / Sports / Patterson continues to be flashy 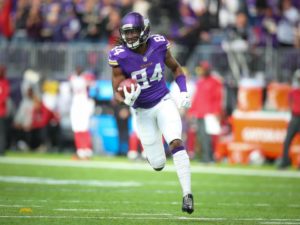 When Cordarrelle Patterson came out for pregame warmups Sunday at U.S. Bank Stadium, an immediate eye was drawn to the socks he was wearing.

Patterson, well known for his “Flash” nickname and flashy style, was wearing socks that featured a Minnesota Vikings player in uniform. The player? Well, it was none other than Patterson.

Patterson’s bravado to wear a picture of himself on his socks was followed by plenty of swagger on the field as Patterson returned the kickoff to start the second half for a 104-yard return in Minnesota’s 30-24 victory over the Arizona Cardinals.

“I might have to do it every week,” Patterson said. “I think it brings us good luck … But I do like those socks. I’ve had them for like four months. I always forget them. Last night I was packing my bag and said ‘hey, I need to pack these.'”

Patterson was packing his unique vision and speed when he provided the big play the Vikings needed on Sunday. He took kickoff off to the right side where a big hole opened up. He shot through the hole, slanted left and outraced the Arizona Cardinals’ for his fifth career kickoff return for a touchdown.

Patterson’s return was one of two 100-yard plays for Minnesota in the game as the Vikings became the first team since the Dallas Cowboys in 1962 to have two 100-yard touchdowns in the same game.

It was the first time in team history with Patterson’s return coinciding with Xavier Rhodes 100-yard interception return for a touchdown.

“If we will just play solid fundamental football and let the big plays come to us, they do,” coach Mike Zimmer said. “Because when you’re in the right place, typically, getting a great rush on the quarterback, a guy throws you the ball, and different things like that. Our message this week was, ‘Make the sound plays first, and let the big plays come to you.’ So they’re not always going to come, but you’ve just got to do your job first and the rest will happen from there.” 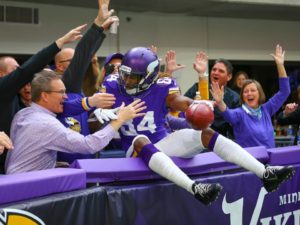 Patterson’s steady season continued as he added four catches for 53 yards. The first-round draft pick in 2013, Patterson has always excelled on kickoff returns. His role in the offense had never materialized on a consistent basis.

This season, Patterson started to contribute on special teams coverage and his role expanded offensively, as well. In the past seven games, he has 32 catches for 295 yards and two touchdowns.

Patterson’s forte has always been being one of the league’s most dangerous return men.

He tied Percy Harvin for the most kickoff return touchdowns in team history. The 104-yard return is the fourth-longest in team history. He owns three of the top four longest returns for the Vikings.

Patterson’s five kickoff return touchdowns are tied for eighth all-time in league history. No other player has more than two kickoff returns for touchdowns since Patterson entered the league in 2013.

“Every time I’m back there, I feel like we have a good chance to score,” Patterson said. “We’ve got one of the best kickoff return teams in the NFL. That’s how we approach each and every game. We talk about it all the time that we might only have one chance each week. So when we get it, just go with it and get the opportunity.”