You are here: Home / News / Patty Wetterling: Our love for Jacob will never die (AUDIO and VIDEO)

A public memorial service was held this (Sunday) morning for 11-year-old Jacob Wetterling at the College of St. Benedict. Each of Jacob’s immediate family members spoke to the crowd, including his mom Patty. 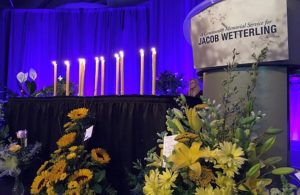 Every hug, every kind note, each and every one has provided us with the courage to move forward and to fight for Jacob and the world that he knew and believed in. Our hearts and prayers go out for all the families that are still searching. We won’t give up ever. Jacob we will always carry you in our hearts and our love for you will never die.

Over the past 27 years in some of their darkest moments we learned about grace and courage from Patty, Jerry, and the entire Wetterling family.  From Patty’s hard work on behalf of missing and exploited children we learned that an individual can make a difference.

I guess for us planning for the future, rather than talking about Jacob in the past was our way to keep his hope alive all these years. Now 27 years later we realize that not a day has gone by that Jacob’s light hasn’t been shining through each one of us.

The service featured a boys’ choir, the reading of a Native American prayer and the playing of Jacob’s favorite song, “Listen” by folk singer Red Grammer. 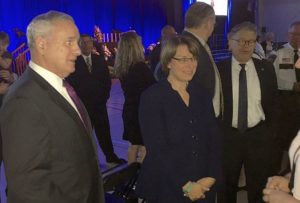 After the service, those in attendance were invited outside to eat ice cream, which is something Patty Wetterling asked us to do in the days immediately following the recovery of Jacob’s remains. 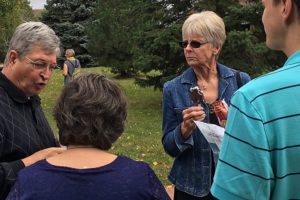 Thanks to MNN Affiliate: http://www.wjon.com