You are here: Home / Sports / Peterson set to visit Patriots 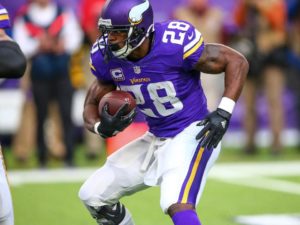 The former Minnesota Vikings running back is scheduled to meet with the New England Patriots on Monday, ESPN reports. Peterson became an unrestricted free agent when the Vikings did not exercise his 2017 option on Feb. 28.

New England has already brought on a new running back this offseason, signing former Cincinnati Bengals back Rex Burkhead.

Versatile back Dion Lewis and Super Bowl LI hero James White are already under contract with the Patriots for the 2017.

Peterson missed almost all of last season with a right knee injury. The seven-time Pro Bowler and 2012 NFL MVP has 11,747 rushing yards and 97 touchdowns over 10 seasons, all with the Vikings.