You are here: Home / News / Philando Castile funeral under way at Cathedral of St. Paul 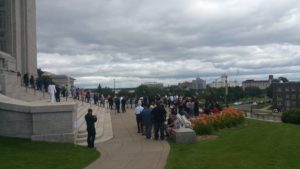 Mourners arrive at the Cathedral of St. Paul for the funeral of Philando Castile

The Cathedral of Saint Paul is filled to capacity for the funeral of Philando Castile, who was fatally shot last week by an officer in nearby Falcon Heights.  The service began with a call for a hug, and those in the pews responded by hugging their neighbor in a show of love for Castile. The Sounds of Blackness choir sang at what is being called a Celebration for Brother Philando. People are standing and clapping — what observers call a celebratory feeling.

Castile’s mother, Valerie, wrote notes about her son for the funeral program and her cousin Sheena Hendersen says, “What she’s saying is that her son always… [has] been a quiet, humble person, a very sweet gentlemen — very sweet. And right now, he’s just acknowledging all this love that he’s getting right now. If he was here to see it, he would appreciate it.”   Hendersen says it’s possible for some good to come out of this.   “You know, with God seeing it all, it’s possible,” she says.