After a record-breaking regular season which featured the nation’s largest turnaround, the Minnesota men’s basketball team was recognized Monday with five year-end honors from the Big Ten Conference. 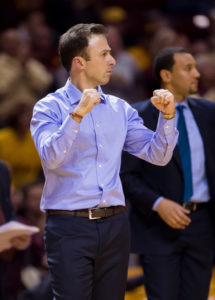 Head coach Richard Pitino was named the Big Ten Coach of the Year, while junior guard Nate Mason earned first team All-Big Ten plaudits and sophomore forward Jordan Murphy was selected to the All-Big Ten Third Team. All three were consensus picks in the polls by the league’s head coaches and media panel.

Redshirt junior center Reggie Lynch was chosen as the Big Ten Defensive Player of the Year, and guard Amir Coffey was named among the top newcomers as a member of the Big Ten All-Freshman Team. Those awards were voted upon by the head coaches.

Pitino becomes just the second Gopher head coach to win the award, and the first since Jim Dutcher in 1982. This year, Pitino has engineered the best win improvement in both the NCAA and in program history, improving by 15 victories. The Gophers (23-8, 11-7) earned their highest finish in the Big Ten in 12 seasons, also the last time Minnesota finished conference play with a winning record. Pitino’s squad reached 11 conference wins for the first time since the 1989-90 campaign, despite ranking 296th in the nation in youth according to KenPom.com and fielding a roster featuring five new players this year, including three starters. Minnesota’s 23 regular season wins sets a new school record, and the Gophers enter the postseason with a top-20 RPI and strength of schedule, poised for their first NCAA Tournament berth since 2013.

MNN Sports Director Mike Grimm talked with Pitino about the honors and about his team:

Mason is the first Gopher to receive first team accolades in 12 years, after a season in which he has led the Gophers in scoring, assists, steals, free throw shooting, and minutes played. The Decatur, Ga., native ranks third in the Big Ten in assists (5.1 apg), assist/turnover ratio (2.7) and minutes (34.2 mpg), fifth in steals (1.4 spg), and eighth in points per game (15.5). He scored in double figures in all but three games during the season, posting two double doubles and eclipsing 20 points on five occasions. Earlier this year, he became the fifth Gopher to amass more than 1,100 points, 350 assists, 250 rebounds and 100 steals. His current tally of 159 assists this year ranks sixth in the Gophers’ single-season record books. Mason becomes the 23rd Gopher to receive first team honors, and the first since Vincent Grier was selected by the coaches in 2005. Mason is the first to earn a spot on both the coaches and media first team since Kris Humphries in 2004.

Murphy’s second-half surge earned him a spot on the All-Big Ten Third Team, the first Gopher to do so since 2013. The San Antonio, Texas native is leading the team and ranked fourth among Big Ten players with 8.7 rebounds per game, rising to second in conference-only games (9.4 rpg). Murphy is second on the team in blocks (35) and third in scoring (11.1 ppg). A Big Ten All-Freshman Team honoree a year ago, Murphy has tallied 11 double-doubles which ranks second in the conference. During the Gophers’ eight-game winning streak in February and March, Murphy averaged 15.6 points and 12.4 rebounds while shooting 60 percent from the field, a key component of the Gophers’ rise to the No. 4 seed and double-bye in the Big Ten Tournament later this week.

The all-time single-season blocks leader in Minnesota program history, Lynch made an immediate impact on opposing offenses during his first season on the court with the Maroon and Gold. Lynch has swatted 106 shots through 31 games this season, breaking Randy Breuer’s 34-year old record of 87. He is just one of seven individuals in Big Ten conference history to surpass 100 blocks in a season, and his current total ties for sixth among all-time Big Ten shot blockers. Lynch broke the Gopher record in the game against Penn State in which he tallied 11 blocks, the most by any player this season in the nation and the second-best total in school history. He currently ranks second in the country in blocks per game (3.5), leading the conference. Lynch also has contributed 6.3 rebounds per game, tying for 11th in the conference and second among the Gophers.

Coffey put forth an impressive debut season with the Gophers, ranking second on the team in scoring (12.0 ppg), assists (93), and steals (35). The Hopkins, Minn., product was second on the team in minutes per game (33.0), leading all players in the Big Ten during conference-only games with 35.6 minutes per contest. Coffey ranked 27th among all Big Ten players in scoring and fifth among freshmen. He posted 19 double-digit scoring games and started 30 of the Gophers’ 31 games, missing just one due to injury. Coffey was a two-time Big Ten Freshman of the Week honoree.

Among the other award winners, Minnesota junior center Bakary Konaté was selected as the Gophers’ nominee for the Big Ten Sportsmanship Award.

Minnesota earned the fourth seed in the Big Ten Tournament, and will face a to-be-determined opponent on Friday at approximately 1:30 p.m. CT at Verizon Center in Washington, D.C. The Gophers’ quarterfinal matchup will be broadcast live on ESPN.