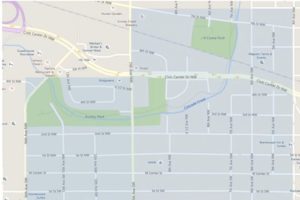 Rochester police are requesting the public’s help in the investigation into a fatal shooting near St. Mary’s Hospital.

Specifically, investigators would like assistance from residents of the Kutzky and Cooke Park neighborhoods (see map at top of the post). They are asking people to check their property for any discarded clothing. In particular, investigators are looking for a gray colored Georgetown Hoyas basketball jersey (Patrick Ewing jersey).

If any items are found, police say they should not be disturbed and the police department should be immediately contacted by calling the non-emergency law enforcement number, which is (507)328-6800.

Police Captain John Sherwin says no arrests have been made in connection with the shooting death of 31-year-old Abdullahi Omar Sheikh, who suffered a fatal gunshot wound to his upper torso while he was inside a car that crashed into the curb along 2nd street southwest shortly before 2:30 Wednesday morning. The incident was initially reported as a traffic crash and it wasn’t discovered that the driver had been shot until he arrived at the St. Mary’s Hospital Emergency Room.

Investigators later recovered a handgun near the vehicle. Two men were in the car with the victim and one of them fled the scene on foot before authorities arrived at the scene. Captain Sherwin now says investigators have accounted for both men and the investigation remains active.

Additional information is expected to be released Thursday morning.  Thanks to KROC, Rochester