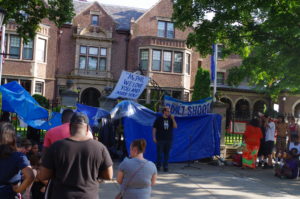 Protesters say they plan to continue gathering in front of the governor’s residence in St. Paul in the wake of the fatal police shooting of Philando Castile. Last night several speakers emphasized the racial divide that still exists in the U-S.   One man from St. Paul said he’s afraid of a civil war in America.  “How many more people, black people and maybe some white people, that are so fed up with the way things have gone in America, that they’re to the edge right now and once we start the let’s shoot the cop, the cops shoot us, I have no choice, I’m involved even though I don’t want to be, I’m involved because I’m a black man.”  The 64-year-old  asked that his name not be used.  It was a relatively peaceful night compared to Saturday, when 200 protestors blocked part of I-94 in St. Paul resulting in 50 arrests and several injured officers—including, one who sustained broken vertebrae after a concrete block was dropped on his head.