You are here: Home / News / Protesters yell at Dayton at Governor’s Residence after police fatal shooting of black man 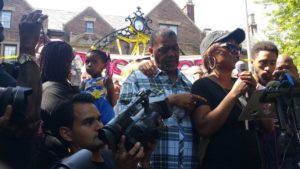 An uproar after police fatally shot a black man last night during a traffic stop in Falcon Heights. Governor Mark Dayton told protesters outside his Residence this morning, “I promise that I will do everything and my administration will do everything in our power to see that this matter is brought to justice and that all avenues are pursued…. Justice will be served in Minnesota.”  Pastor Danny Givens responded he cannot say he appreciates anything that Dayton said.  Givens told the governor, “I been to your house… as a guest to meet you, as a community activist and leader, I been to your house because your people keep killing my people!”

Dayton is asking that the U-S Justice Department begin an immediate investigation.  The governor says he made the request this morning to White House chief of staff and Minnesota native Denis McDonough.  Dayton in a written statement extends his deepest condolences to the family, friends and community of 32-year-old Philando Castile. Dayton says the state Bureau of Criminal Apprehension is collecting evidence and interviewing witnesses and, quote, “I will do everything in my power to help protect the integrity of that investigation.”