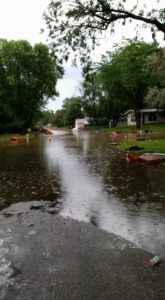 “Very moist atmosphere near the top, near the maximum for our moisture in the atmosphere yesterday. And you put thunderstorms in that environment and you’re going to get incredible rain rates.  And that’s what we saw yesterday. ”

Close to nine inches of rain is being reported north of Olivia, seven southeast of Lake Lillian and around five south of Bird Island.  Franks says most places saw between four and five inches of rain with this system.

There’s been damage, closed roads and stranded drivers in Renville and Redwood counties. In nearby Morton, a basement wall of one home caved in, causing evacuations.

In Willmar,  residents  are being asked to minimize their water use.   The city’s wastewater treatment plant is having a very difficult time keeping up. Willmar Mayor Marv Calvin says minimal water use will help prevent sewers from backing up. Residents are also being asked to make sure their sump pumps are draining outside and not into the city’s sewer system. Motorists should also avoid driving around barricades at flooded intersections, Calvin says the wakes are causing extra damage to homes.

For more on this story listen to MNN’s Tasha Redel’s  full interview with forecaster Chris Franks: