You are here: Home / News / REAL ID fails to pass in Senate 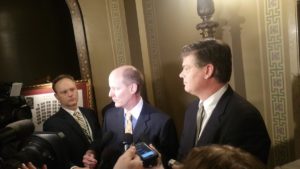 By a vote of 38-29 the Minnesota Senate today failed to pass a bill would bring Minnesota into compliance with federal REAL ID allowing residents to use drivers licenses to board airplanes. The bill’s author, Republican Senator Eric Pratt from Prior Lake says:


Five Republicans also voted “no” on the measure. Senate Minority Leader Tom Bakk says the bill failed to pass in the Senate for a couple of reasons, including “there are people that think we’re sharing too much information with the federal government, and then there’s the other additional issue of bringing more into this bill than is necessary to meet the federal requirements of Real ID.”

Governor Dayton and Democrats argued that the bill should provide driver’s licenses for undocumented immigrants. Republicans say the governor was “playing politics with the issue” and Minnesotans who “expect to fly next year should be very disappointed that Democrats killed the bill.”