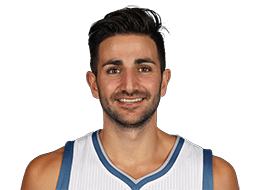 Rubio stayed in the Twin Cities to rehab his injury during the team’s recent three-game road trip. The Timberwolves have a rare home back-to-back with the Los Angeles Clippers on Saturday night and the Los Angeles Lakers on Sunday night. If Rubio responds well after the workout, coach Tom Thibodeau said he could return to the court this weekend.

”As long as he feels pretty good tomorrow,” Thibodeau said after practice.

The Timberwolves have missed Rubio’s experience and defensive presence during his absence. Rookie Kris Dunn has started and second-year pro Tyus Jones has been the primary backup. Both have played well at times, but for now lack the Spainard’s composure in critical moments and the ability to organize an offense.

”Just the way he can push the ball, his decision-making, team defense, he’s all over the place,” Thibodeau said. ”He brings a lot of energy. In transition, he’s such a good decision maker that he gets you a lot of easy baskets, and he knows how to move the ball around.”

Rubio was injured in the second game of the season at Sacramento when a Kings player fell into his elbow in the fourth quarter. Without him, the Wolves are off to a disappointing 2-5 start in a season in which they are hoping to end a 12-year playoff drought.

In his six years in the league, Rubio has established himself as one of the best defensive point guards. Getting him back at the top of the Wolves’ defense could go a long way toward helping the young team be more consistent on that end. His ability to get his teammates shots where they are most comfortable also lifts the offense and helps the Wolves avoid the stagnancy that has occasionally plagued them this season.

”He adds a lot of experience and he’s been through a lot of things here,” center Karl-Anthony Towns said. ”To have a player like that, especially on the bench (during timeouts) where he’s like another coach, it’s awesome to have him.”

Rubio is listed as questionable for the game on Saturday against the Clippers.

”He looks sharp,” forward Shabazz Muhammad said. ”I told him it looks like he hasn’t missed a beat. His conditioning, going hard, shot’s looking better. He’s looking really good out there and we can’t wait to have him back.”