You are here: Home / News / Sanders in Minnesota campaigning for Clinton today 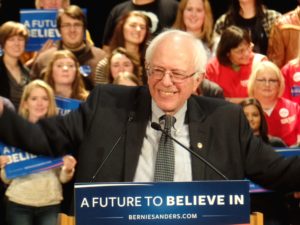 Former presidential hopeful Bernie Sanders is in Minnesota today campaigning for Hillary Clinton.  Sanders is set to host rallies at Northrup Auditorium on the U of M campus in Minneapolis and at the Kirby Student Center on the UMD campus in Duluth. The Vermont senator, who topped Clinton in Minnesota’s caucuses back in March, continues to be popular with college-age and young voters. Today he plans to focus on the benefits of Clinton’s economic plan and he’ll also urge Minnesotans to vote early.  Republican presidential nominee Donald Trump recently tweeted that Sanders should pull his endorsement of Clinton, after she was heard on leaked audio telling a private fundraising crowd in February that Sanders supporters “are living in their parent’s basement.” Sanders has said however that Clinton’s comments were “absolutely correct.”