You are here: Home / Sports / Sano Leads All-Star Voting for 3B

The Minnesota Twins third baseman took over the American League
lead at his position Tuesday in fan balloting for this summer’s
All-Star Game.

“It makes me happy to be close to my first All-Star Game as a
big-leaguer,” said Sano, whose Twins continue a three-game series
Wednesday against the Seattle Mariners. “Not everybody can be an
All-Star. I would be glad to represent the Twins. They gave me an
opportunity to be here.” 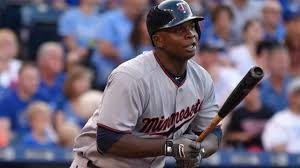 Despite the Twins leading the AL Central, Sano is the team’s only
player in the top five in All-Star voting.

“There have been ups and downs, but I’m only thinking about every
day doing my job,” Sano said. “The team is winning. I’m trying to
be a leader for this team, maybe that’s what the fans see in me.”

There have been plenty more ups than downs for Sano this season.

And when Sano hits it, he hits it hard. His exit velocity of 96.6
mph leads the league.

Minnesota manager Paul Molitor, a seven-time All-Star during his
playing days, isn’t ready to declare Sano the winner yet.

“I probably have a much different perspective on that than he
does,” Molitor said. “It’s still early; these things change.”

And Molitor provided a cautionary tale.

“It’s not bad for a young player, but it can be a distraction if
you go out and try to hit home runs to make the All-Star Game,”
Molitor said. “He just needs to continue being himself. He’s been a
big factor for us having a good first 50 or so games. Let’s keep it
up.”