The pitching matchup is a doozy: Twins seven-game winner Ervin
Santana against the Giants’ best pitcher at home, Matt Moore. 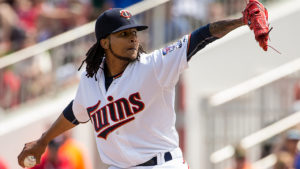 The Giants and Twins haven’t met since 2014, when San Francisco was
the division leader, and played like it. The Giants swept the
three-game home series by a total of 16-4 to run their winning
streak over the Twins to five dating back to 2011.

However, those 2014 games were pitched by Tim Lincecum, Ryan
Vogelsong and Madison Bumgarner, none of whom will be around for
the rematch.

Instead, the Twins will employ the big-name pitcher in the opener.
Santana (7-3) ranks third in the AL in ERA (2.44) and is tied for
third in wins.

The right-hander hasn’t been nearly as sharp in his past six starts
as he was in his first six. After opening the season 5-0 with a
0.66 ERA, Santana has interspersed three bad outings (18 earned
runs allowed) among three good ones (one earned run allowed) in his
past six starts.

His most recent outing was among the bad ones. He was lit up for
seven runs and seven hits in just four innings during a 7-2 loss
against the Los Angeles Angels on Saturday in Anaheim.

If there were ever a good time to have a clunker, Saturday was it.
Afterward, everyone was talking Albert Pujols’ 600th home run,
which came off Santana, rather than the pitcher’s problems.

“I’m not the only one, you know,” Santana said of serving up a home
run to his former Angels teammate. “I’m happy for him, I’m glad he
got it done.”

Santana is 14-13 in 39 career interleague starts, but he has never
faced the Giants.

He lost 5-1 to Colorado in interleague play when the Twins hosted
the Rockies in May.

Moore, meanwhile, has faced the Twins four times in his career, all
while a member of the Tampa Bay Rays. He went 1-0 with a 4.15 ERA
in those contests. 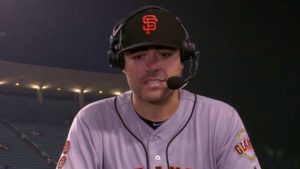 The left-hander is 3-3 in 11 career interleague starts.

The Giants are opening a five-game homestand of all interleague
games. They will host the Kansas City Royals on Tuesday and
Wednesday.

San Francisco, which has lost seven of its past 10 games, used a
four-run 10th inning to beat the Milwaukee Brewers 9-5 on Thursday
and salvage a 3-4 trip. The extra-inning rally came after they blew
a late lead.

“We’ve had some tough times, and you know, we give up a two-run
lead there in the ninth and (yet) find a way to win the ballgame,”
Giants manager Bruce Bochy noted with a sigh of relief after the
game. “You keep doing that and we’ll get this turned around.”

The Twins also are coming off a tight win, 2-1 in their series
finale at Seattle on Thursday night behind the impressive pitching
of Kyle Gibson. Minnesota had lost the first two games of the
series at Safeco Field.