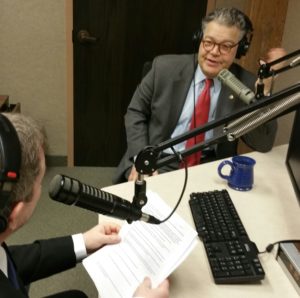 U-S Senator Al Franken is skeptical of the merger and says “this is kind of a classic vertical integration and the creation of an entity that can decrease competition, which leads to higher prices and less choice for consumers.”

Lawmakers plan to hold a hearing on the merger on December 7th.

Franken recently expressed his concerns about the merger in a letter to the FCC and Department of Justice. Here is that letter:

I am writing to urge you to examine AT&T’s proposed acquisition of Time Warner with the highest level of scrutiny. I have serious reservations about the $85.4 billion deal, which would give one of the nation’s largest telecommunications providers control over a wide array of content. A deal of this magnitude could have a lasting effect on the quality and affordability of programming available to consumers across America. And I’m skeptical of any further consolidation in the media and telecommunications industries that could lead to higher prices, fewer choices, and even worse service for Americans. As you await more details regarding the proposal, I urge you to consider how the deal will affect consumers’ access to content and to recognize the very serious enforceability challenges that render behavioral conditions ineffectual.

As the largest pay TV provider in the nation, after acquiring DIRECTV just last year, and the second largest mobile broadband provider, AT&T is one of the nation’s leading distributors of content. Time Warner is one of the world’s largest TV and entertainment companies and owns some of today’s highest-rated programming, including HBO, CNN, and Warner Bros. Combining these behemoths would create a mega media conglomerate with both the incentive and ability to use its platform to harm consumers and competitors alike. It could promote its own programming above that of other TV and entertainment companies’ or restrict other distributors’ ability to offer its highly-desired content. Innovative offerings like HBO’s internet streaming service could be jeopardized entirely, or made available on different and discriminatory terms to broadband customers of companies other than AT&T, if such restrictions were profitable for the combined company. And neither independent programmers nor small pay TV and online video distributors would be able negotiate on fair terms against the gigantic entity this massive deal would produce. The potential loss of entertainment and cultural programing diversity, available on widespread bases and at affordable prices, is a serious concern.

AT&T’s CEO Randall Stephenson has already stated that any of the aforementioned concerns would be adequately addressed by behavioral conditions[1], but I have serious doubts about the enforceability and reliability of such conditions as a remedy for anticompetitive behavior. When Comcast initiated its acquisition of NBCUniversal in 2011, I sent the Federal Communications Commission (FCC) a letter expressing concern because – like AT&T’s proposal to acquire Time Warner – it was “a vertical merger that gave one company the ability to control both programming and the pipes that carry the programming.” I predicted then that “Comcast would have strong incentives to favor its own programming and raise prices, thereby harming both consumers and competitors.” Sure enough, in violation of a condition imposed on the deal, Comcast subsequently undertook efforts to favor its own programming by keeping MSNBC and CNBC – its newly acquired channels – in a TV channel lineup “neighborhood” of news networks while relegating Bloomberg News to an undesirable location. Over two years after Bloomberg complained to the Commission, and following a protracted and expensive legal battle, Comcast was finally compelled to end its anticompetitive treatment of Bloomberg News and comply with the condition.

And this was just one of many complaints about Comcast violating or not honoring conditions. Comcast was sanctioned by the FCC for failing to deliver on promises regarding affordable standalone broadband offerings, and it was accused of violating both the spirit and the letter of its commitments on local news, racial diversity in programming, and online video distribution. Unfortunately, many of those complaints languished before the Commission for extended periods of time, delaying resolution of disputes and allowing anticompetitive behavior to continue. As a result of Comcast’s questionable compliance with its merger order, I am doubtful that any behavioral conditions in a context such as this one could be structured with sufficient precision to prevent all competitive harms.

AT&T itself may have a similarly troubling track record when it comes to compliance with merger commitments. For example, the company quickly hiked prices after acquiring DIRECTV last year – citing higher programming costs as a factor, despite having told regulators that the merger would help it keep those programming costs in check. There have also been accusations that AT&T has failed to meet commitments it made to meet broadband deployment goals when it combined BellSouth, Cingular Wireless, and the legacy AT&T long distance company to form the current company over a decade ago. To the extent that AT&T has a history of going back on its commitments made in furtherance of an acquisition or merger, such history should be taken into account when evaluating its current proposal.

For the above stated reasons, I urge you to afford the highest scrutiny to the potential anti-competitive repercussions of AT&T’s proposed acquisition of Time Warner. I strongly believe that further consolidation in the telecommunications and media industries should only be permitted if it results in better and more affordable services for consumers across the nation, and I have serious doubts that such aims could be achieved with this deal.

As always, thank you for your attention to this matter.