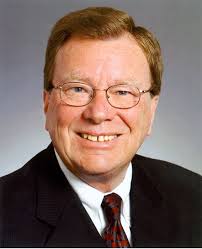 Metzen served in the state legislature for more than four decades and retired at the end of the last legislative session.  He was first elected as a state Representative and served six consecutive terms. He was elected to the Senate in 1986. Metzen announced in September that he was being treated for a recurrence of lung cancer. He is survived by his wife, Sandie and two adult sons.

“Senator Jim Metzen was a great DFL leader and a wonderful human being. He served well his Senate District and the State of Minnesota. I extend my deepest condolences to his wife Sandie, family, and many, many friends.”

“I’ll always remember Jim for his wonderful personality, his jokes and his nicknames for everyone. Jim embodied the legislator that I think many of us strive to be like. He didn’t allow partisanship to cloud his judgement of somebody. If you were a good person, then you were well respected by Jim. His work spanned more than four decades – and he represented the people of South St. Paul with great distinction. From his first days in the legislature, being elected to the House of Representatives in 1974 – Jim always had their backs, and I think we will not see another elected official like him in a very long time. Jim – your smile and your friendship will be greatly missed here at the Senate.”