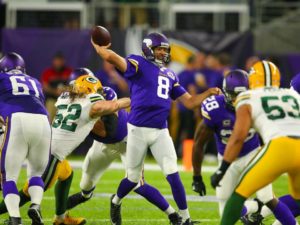 The Minnesota Vikings are in another adjustment mode without their star running back heading into the third game of the season.

At least they’re undefeated as they venture on the road Sunday afternoon to take on the Carolina Panthers.

The Panthers (1-1) also are turning to a new starting running back, so the teams are even that regard.

With Adrian Peterson requiring surgery for a torn meniscus suffered Sunday night, the Vikings will be without the leading rusher in franchise history.

“Obviously, it’s hard to replace a player like Adrian,” quarterback Sam Bradford said. “It’s just kind of next man up. I haven’t been here long, but I think we have great running backs and the guys behind him are eager for the opportunity.”

Third-year running back Jerick McKinnon will have the next chance to make an impact at running back for the Vikings.

The Panthers will have their own committee in the backfield, with coach Ron Rivera indicating Cameron Artis-Payne will be active as the “lead” back and Fozzy Whittaker also in the mix along with short-yardage back Mike Tolbert with Jonathan Stewart (hamstring) likely out a few weeks. Whittaker responded when Stewart was injured against the San Francisco 49ers by gaining a career-best 100 yards on the ground.

“He’s a stout inside runner,” Rivera said of Artis-Payne, who was inactive against San Francisco. “He’s more ‘plant that leg and drive straight ahead,’ where Fozzy is a little bit more niftier, a little bit better lateral movement.”

Carolina quarterback Cam Newton threw for four touchdowns in the latest game, another example of the flexibility the Panthers have on offense.

Seven teammates caught passes from Newton when a 46-27 win over the 49ers marked the most points ever in a Carolina home opener.

“Everybody is on board,” Newton said. “We’re firing from all cylinders and it’s fun to be a part of and I know it’s fun to watch.”

Minnesota had been going through change since quarterback Teddy Bridgewater was injured during the preseason. Bradford, who was traded to the Vikings from the Philadelphia Eagles before the opener, continues to settle in.

Minnesota’s 2-0 start has made the transition easier to digest, at least for now.

Bradford said he anticipates that Carolina’s defense could have a different plan without having to deal with Peterson:

The Vikings put offensive tackle Matt Kalil on injured reserve this week as well, so coupled with Peterson’s injury that was a double-whammy for the team.

“I feel like we have to come back to work and go play Carolina,” Zimmer said, summing up his thoughts on the topic. ” … At this point and time, I think it’s tough to find left tackles.”

Zimmer said he’s turning his attention to the Panthers, whose offense can create trouble in various ways in part because of Newton’s mobility.

“It makes it difficult,” Zimmer said. “You have to be very disciplined in what you’re doing. … They scored 46 last week, so they can do a lot of things.”

Panthers tight end Greg Olsen said the team is capable of moving on after injuries or mistakes.

“We don’t really worry about a lot of that, we just keep playing,” he said.

In a 2014 victory over Carolina, the Vikings kept Newton under control. He completed 18 of 35 passes for 194 yards, holding a 65.7 quarterback rating. Bridgewater checked in that day at 120.7.

The Panthers have won 14 consecutive home games at Bank of America Stadium, but their uneven performance — in part because of four turnovers — against San Francisco left questions for the reigning NFC champions.

“Too many things out there have to get straightened out and get taken care of,” Rivera said.

Zimmer said this is a chance for his team to again show it can adjust.

“Everyone is concerned about that we don’t have this, we don’t have that,” Zimmer said. “It’s a team game. That’s why we have 53 guys here, so we’re trying to win as a team.”