You are here: Home / Sports / Special teams could be big Sunday for Vikes-Pack 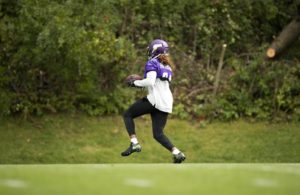 The Green Bay Packers will be wise to treat Cordarrelle Patterson carefully this weekend.

He has had their attention since his very first play against Minnesota’s biggest rival.

Patterson set an NFL record that can never be topped as a rookie for the Vikings on Oct. 27, 2013, when he caught the opening kickoff at the Metrodome and returned it 109 yards for a touchdown.

The Packers promptly removed punter Tim Masthay from kickoff duty, replacing him with kicker Mason Crosby, but Patterson still tacked on a 51-yarder later that night.

The Packers went on to win 44-31 and are 4-1-1 against the Vikings in Patterson’s career, but he has produced some of his longest runbacks in games against Green Bay. Holding the all-time franchise record with 11 kickoff returns of 50 or more yards, Patterson has tallied five of them while playing the Packers. In six matchups against them, his average on 18 runbacks is 36.7 yards.

”We just try to get better each and every week and just focus on whatever team we’re playing that week,” Patterson said, dismissing the notion of saving extra energy for facing the Packers.

Patterson, who’s in the final year of his contract, could benefit from the new rule that places touchbacks at the 25-yard line.

”Some kickers’ legs are not as strong as the others. Some of them can’t kick it out of the end zone every time, and some of them will mishit it,” Patterson said. ”That’s an opportunity I’ve just got to take advantage of and just help my team out.”

The Vikings host the Packers on Sunday night in the debut of U.S. Bank Stadium, sending the series back indoors. Crosby is still handling kickoffs, ranking eighth in the league in touchbacks since entering the NFL in 2007.

Patterson produced a 61-yard return in the season opener at Tennessee.

”He doesn’t lack confidence or athletic ability. It was really good for him. It was good for our blockers,” Priefer said. ”We preach staying on the blocks and finishing blocks and doing the little things, because we have such a great returner back there. Our guys really block well for him.”

The Vikings special teams player under more scrutiny these days is kicker Blair Walsh, who missed one of two extra points and two of six field goals in the 25-16 victory over the Titans last week. He infamously hooked left that 27-yard field goal attempt in January that would have sent the Vikings to the next round of the playoffs, too.

”He’s our guy, but he has to make those kicks,” Priefer said. ”He was disappointed just as much as we were disappointed that he missed them.”

All four of Walsh’s made field goals came in the second half, at least.

”You want to make the other two and be more consistent for your team,” Walsh said, ”but I have been in the past and I know I will be in the future, so I’m not going to let one game get under my skin.”