You are here: Home / Sports / Sprint car race tonight believed to be first spectator sport in Minnesota since March (AUDIO)

(Jackson, MN) — There will be a live sporting event in Minnesota tonight when the Jackson Motorplex in southwest Minnesota hosts a sprint car race with loaded field of drivers. There will be no fans in the stands, but the general public can watch the event over the internet by paying an on demand fee. This is believed to be the first spectator sport in Minnesota to have a live event without spectators since the pandemic shut everything down in mid-March. The track had put in a request with the Governor’s office a few weeks ago hoping to host a live event tonight and once the facility received approval, the plan was put into place. The response from drivers was so overwhelming that the track is now going to have racing both tonight and tomorrow night and have called it the “Great Lakes Shootout.” Johnson says more than 60 sprint cars are signed up to compete with the winning driver taking home a five-thousand-dollar price tonight and a seven-thousand-dollar payout tomorrow evening. Drivers and race teams will follow social distancing protocol in the pit area by maintaining at least a 15-foot space between each set up. A nearby campgrounds will serve as an overflow area for race teams. Safety crews will be wearing their usual protective gear. Racing both nights starts at 6:30 P-M. The Jackson Motorplex is a four-tenths-mile dirt track on the Jackson County Fairgrounds and tonight starts the 67th year of racing. 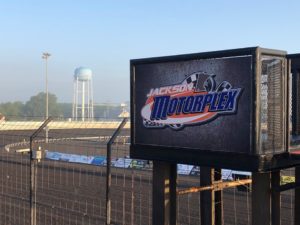