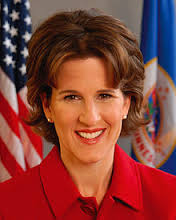 (St. Paul, MN)  —  State Auditor Rebecca Otto is suing the state over a law approved last year that will allow counties to outsource their audits. Otto is asking a Ramsey County judge to uphold her office’s “constitutional authority” to audit counties under the new law, or declare the law unconstitutional.  Otto says when the state legislature passed the law in the waning hours of the 2015 session, it essentially “usurped the core functions from the state auditor”. Republican Representative Sarah Anderson from Plymouth calls the suit “frivolous” and says it’s a waste of taxpayer dollars.

UPDATE: Here is Governor Mark Dayton’s statement on the lawsuit: