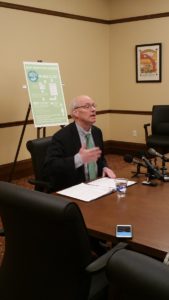 After reviewing the plan over the weekend, Frans says his “first take is that it’s going to cost a lot of money and it’s going to take a lot of time, and if we go down that road, it’s going to make it very difficult to get this implemented in 2017.”

Specifically, the way it’s structured now, Frans says the GOP plan could cost the state around $20 million to hire an outside firm to handle eligibility verification–which he says is a “tricky” process.

Frans says he’s willing to listen to other ideas.

GOP Senator Michelle Benson of Ham Lake says Republicans are willing to be flexible and work with the governor over “technical details.” She says the important thing is “getting something done to help people who’ve been hurt by the government’s poor decisions over the past six years.”