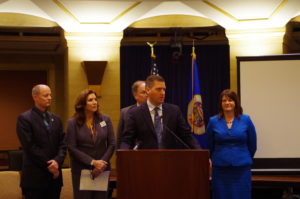 The state’s continuing budget surplus has Governor Mark Dayton and Republicans sparring again over tax cuts and spending increases.  Dayton notes uncertainty in the economic forecast, depending on what happens in Washington D-C to affect international trade, inflation and other aspects of the economy.  He says, “The effects of those uncertainties are presently unmeasurable. However their potentials for seriously negative impacts on our state’s economy and fiscal well-being are enormous.”

House Speaker, Republican Kurt Daudt says hopefully the governor will “back away” from his proposals to increase taxes and spending.  Daudt says people should remember that a surplus means government collected more money than it needs from Minnesotans.  “We think we should give some of that back, reinvest back in Minnesotans,”  he says.   Republicans’ push for permanent tax cuts will likely be a big area of disagreement with Governor Dayton and Democrats.