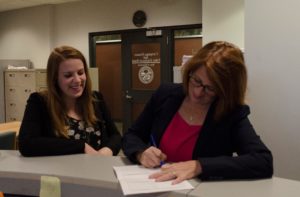 State Representative and former House Democratic Majority Leader Erin Murphy is first to jump into the race for governor in 2018. Murphy, who’s from Saint Paul, says she and her husband have had good years and lean ones as they raised their family.  She says, “My experience is a lot like people across the state of Minnesota who in many cases are still struggling and not fully recovered from the recession.”  Murphy says she’ll spend the next “bunch of months” talking with Minnesotans about investing in education and early learning, making sure college is affordable, and how to help aging Minnesotans stay in their homes as long as possible.  Murphy was just re-elected to her sixth term in the Minnesota House.

The Minnesota Jobs Coalition says Murphy is “dangerously out of touch,” noting she voted to bring Obamacare to Minnesota which caused skyrocketing health care costs for families.