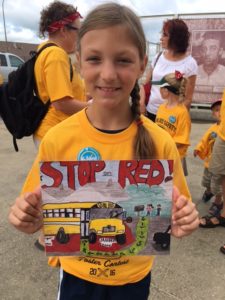 Twenty-three students from across the state, ranging from first through 10th grades are being recognized at the Twins game this afternoon. The kids took part in the state patrol’s, “Bus Safety Poster Competition” and their artwork was chosen. Fifth grader Sophie Grimm from Rockford took second place. She explains her poster:

This year’s theme, hashtag-stop-on-red(#stop on red) challenged students to think about safety concepts for students and motorists around school buses.   Minnesota State Patrol Lt. Brian Reu says today’s event is a way to appreciate the kids for what they did.  The group of winners will be taken down to the field before the game, be announced and display their posters during the pregame ceremony.

(Just as a way to appreciate the kids for what they did, we want to recognize them at the game. The kids will be taken down to the field before the game and display their posters and be announced in the pregame ceremony today.)