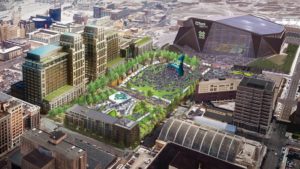 ESPN’s X Games will be held in Minneapolis in 2017 and 2018, with many of the events being held in the Minnesota Vikings’ glittering new stadium, the network announced Wednesday.

”We’re definitely pumped,” X Games vice president Tim Reed said. He cited the ”young, vibrant aspect” of Minneapolis and the support of the city and state for the bid. He called the new, $1.1 billion stadium that opens this summer ”a beautiful building.”

Competitions include skateboarding, BMX and motocross. A flat track for motocross will have to be built elsewhere in Minneapolis, and the games are working with the city to identify a location, Reed said.

It’s the first time the X Games have been held in the Upper Midwest since the games began in 1995. The event has been held in Austin, Texas, for the past three years.

Last year, the X Games drew over 100,000 fans and brought in $74 million for Austin, Reed said. Some 250 athletes compete in the four-day event, with an average age of 26 or younger, he said. Athletes are invited to compete in the games.

”These are the best of the best,” Reed said. ”These guys train year round. They work at their skill.”