You are here: Home / Sports / Team Europe ready for Ryder Cup in Chaska 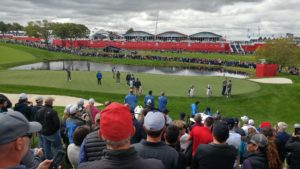 Team Europe during Wednesday’s practice round

With half of the roster filled with Ryder Cup rookies, the value of the European veterans in golf’s biennial international grudge match has only increased.

Justin Rose and Henrik Stenson are just the type of tandem for the team to turn to.

”We hit the ball a very similar distance, so we can work off one another from that point of view,” Rose said. ”Statistically we play a similar game, our fairways and greens. Our ball-striking would be our strength.”

Even their caddies are pals.

”It’s not just a team of me and Henrik. It’s a team of four that feel comfortable together,” said Rose, who played with Stenson at the last Ryder Cup for two four-ball matches and one foursome match in Gleneagles, Scotland. They won all three.

The pairings haven’t been revealed yet for the start of play on Friday at Hazeltine National Golf Club, but not seeing Rose and Stenson together for at least some of the partnered competition would be a surprise.

Rose, the 36-year-old Brit, has a 9-3-2 record over three Ryder Cups with a six-match winning streak. Currently ranked 11th in the world, Rose brought a gold medal home from the Olympics in Brazil. He beat out his buddy as Stenson, the 40-year-old Swede who is now No. 5 in the world, settled for silver.

”Everyone is kind of contributing whichever way they can,” said Stenson, whose record is 5-4-2 over two previous Ryder Cups. ”As I said, it’s a very nice atmosphere in there, and I think the boys who haven’t been here before are feeling very welcome.”

Rose beat Phil Mickelson in Scotland in Sunday singles play with a 35-foot birdie putt from the back of the 17th green to win that hole and a 12-footer for birdie on the 18th to pick up a critical point toward Europe’s momentum in 2014.

With Danny Willett (Masters), Stenson (British Open), Rose (Olympics) and Rory McIlroy (FedEx Cup), the European team has quite a collection of champions from this season. Playing in Rio de Janiero helped get them in a nationalist team, but, no, the gold medal is not here for inspiration.

Age isn’t always a benefit, alas. Rose has been bothered by a back injury this year. Stenson has a slight tear of the meniscus in his right knee, an injury that forced him out after one round at The Barclays in late August and kept him out of the BMW Championship and the Tour Championship this month to rest. Speaking Wednesday before practice, Stenson said his knee feels fit enough to play five matches if he’s asked to.

”I’m up for a lot of golf and unless the knee tells me otherwise,” Stenson said, ”that’s the way I approach it.”

Rose has a special fondness for the course at Hazeltine, finishing in 23rd place here at the PGA Championship in 2002 about a month before his father, Ken Rose, died of cancer. During his practice round Tuesday, Rose was reminded by the scenery of a photo his mom has of his dad watching the action in Minnesota that year under some trees on the back nine. It’s titled, ”Happy Days.”

”I do think about my dad a lot, especially when it comes to moments like this because these are moments he would have loved to have been a part of,” Rose said. ”Yeah, it’s a nice source of energy for me this week.”

Only Lee Westwood at age 43 is older than Stenson and Rose on the rookie-laden European team. The experience and poise Stenson and Rose can provide will thus be welcomed by the visitors against an opponent determined, perhaps even desperate, to stop the slide.

”In America,” said Andy Sullivan, the first-timer from England, ”obviously it’s going to be an atmosphere and quite one-sided.”

The Europeans were treated to a show by magician Dynamo on Tuesday night, part of the weeklong team-building process designed to both inspire and relax.

”Very impressive,” Stenson said. ”Before I knew it, I was back in bed and I didn’t even walk to my room.”

Rose, Stenson and the rest of the squad will try to produce some of their own tricks on the course starting Friday morning.