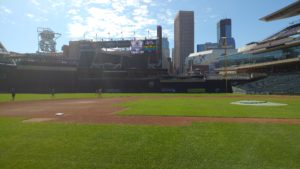 Down a couple of key cogs in their lineup, the Detroit Tigers didn’t flinch.

The all-around performance was well-timed, with little room left on the schedule for stumbles.

Matt Boyd bounced back from a bad start by breezing through eight innings, backed by home runs from James McCann and Miguel Cabrera as the Tigers beat the Minnesota Twins 8-1 on Tuesday night to cut the deficit between them and the second AL wild card spot to 1 1/2 games with 12 to go.

Boyd gave up a homer to Robbie Grossman in the seventh among only three hits allowed. He matched his career best with seven strikeouts and walked just one, after being pounded by Minnesota for seven runs in 3 2/3 innings on Sept. 13.

”He was on tonight, and you’ve got to tip your hat to him,” Minnesota’s Byron Buxton said.

Detroit played without Victor Martinez (bruised knee) and second baseman Ian Kinsler (concussion-like symptoms), both having been hit by pitches from Cleveland’s Trevor Bauer on Sunday.

McCann, in the designated hitter role for Martinez, sent a three-run shot into second deck above left-center in a four-run sixth against Hector Santiago (12-9). Cabrera hit his 34th homer the following inning, a two-run drive against Michael Tonkin.

Cabrera is batting .375 in 32 at-bats over seven games at Target Field this season, with five doubles, three homers, seven runs and six RBIs.

Cameron Maybin had an RBI triple, Justin Upton drove in two runs and everybody in the lineup had at least one hit for the Tigers, who damaged their playoff push with a four-game split against the worst-in-the-majors Twins last week. They’re only 8-9 this month.

Brian Dozier had a lonely leadoff single in the bottom of the first and stole second base with none out, only to be stranded by Boyd. Kepler walked in the second inning and was quickly caught stealing. Then Boyd retired 14 straight batters until Grossman went deep with one out in the seventh.

The significance of the situation wasn’t lost on Cabrera, who started the fourth inning by crushing a double to right field and sliding in to beat the throw from Max Kepler. The hulking power hitter hustled to advance a base by tagging on a fly ball to Buxton in medium-range center field. Then he rumbled home for a 2-0 lead on a groundout to third, sliding underneath catcher John Ryan Murphy’s tag after the throw home to try to get the double play.

”We had three chances to throw out Cabrera. I don’t know if you ever see that,” Twins manager Paul Molitor said.

Cabrera was initially called out, but the replay review brought a reversal and a rousing round of high-fives in the dugout.

”Anytime a big player does something like that, it pumps everybody up,” Saltalamacchia said.

Said manager Brad Aumsus: ”He’s got great instincts on the bases. He’s not 21 anymore, but he still has a pretty good idea of what he is and isn’t capable of.”

Dozier stretched his hitting streak to 23 straight games, the longest for the Twins in nine years since Torii Hunter had one of the same length and the fourth-longest in the major leagues this season.