You are here: Home / Sports / Timberwolves notch a win at home over Lakers 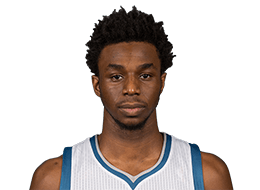 Andrew Wiggins poured in a career-high 47 points, equaling the entire Lakers starting lineup to lead the Minnesota Timberwolves to a 125-99 victory over Los Angeles on Sunday night.

Wiggins made 14 of 21 shots and Nemanja Bjelica added a career-high 24 points and eight rebounds for the Timberwolves, who played without starting guard Zach LaVine and reserve forward Shabazz Muhammad. Both missed the game with sore right knees.

Lou Williams scored 13 of his 17 points in the fourth quarter for the Lakers, who got 47 points from their starters and 52 from their bench. Julius Randle had 14 points and six rebounds and Jordan Clarkson scored 14.

Wiggins’ previous career-high was 36 points. He hit 17 of 22 free throws and was doused with Gatorade during his postgame interview to give Minnesota its third win of the season.

The game featured two of the most promising young cores in the league, with Wiggins, LaVine and Karl-Anthony Towns hoping to end Minnesota’s 12-year playoff drought and D’Angelo Russell, Randle and Brandon Ingram reviving the Lakers in the post-Kobe era.

Entering the season, the Lakers were believed to be a step behind the Wolves in the process, but they won six of their first 10 games under new coach Luke Walton while Minnesota got off to a disappointing 2-6 start.

Both teams played on Saturday night, but the Wolves were finishing a rare home back-to-back, and appeared to have the fresher legs all night. The Timberwolves scored 21 points off of 17 Lakers turnovers.

Lakers: C Timofey Mozgov was in foul trouble all game, playing just 15 minutes before fouling out. … Ingram played after being listed as questionable with a sprained ankle suffered on Saturday night in New Orleans. Ingram finished with 10 points in 26 minutes. … The Lakers wrapped up their three-game road trip at 2-1.

Timberwolves: Wiggins scored a career-high 25 points in the first half. … F Brandon Rush missed his fourth straight game, and coach Tom Thibodeau revealed that Rush has been dealing with a bruised big toe on his right foot.

With LaVine injured, Wolves coach Tom Thibodeau inserted the 6-foot-10 Bjelica, normally a power forward, into the lineup at small forward and moved Wiggins to shooting guard. The former Euroleague MVP also had three steals and a block.

The second unit has been a strength for the Lakers all season, averaging 52.1 points per game in the first 10. The leading scorer from the game has come from their bench in eight of 11 games so far this season.

Towns finished with 22 points and 12 rebounds, but he really had to work for it. The reigning rookie of the year made 7 of 22 shots, including just 6 of 10 free throws.

Lakers: Head home from a three-game road trip to face Brooklyn on Tuesday.

Timberwolves: Continue a four-game home stand with a game against the Hornets on Tuesday.