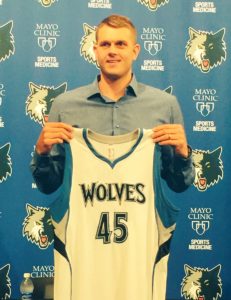 Cole Aldrich was vacationing with his wife in Italy when a lifelong dream came to fruition.

He had sealed a deal to play for the Minnesota Timberwolves, the team he grew up watching in suburban Minneapolis. Because of the time difference, a giddy Aldrich decided to send his father a text message rather than give him a call.

The message did not quite have the effect he had planned on.

”I thought you were coming home from vacation!” Walter Aldrich hollered from the back of the room.

Alas, Aldrich meant he was coming home for good. To play basketball for the Timberwolves, to live in the home he returns to every offseason after spending the first six seasons of his NBA career bouncing around with five other teams.

”I’ve been a Timberwolves fan all my life,” Cole Aldrich said. ”Whether it was in another city playing for New York or Oklahoma City or wherever, I always tried to keep tabs. And you root for your city. For me to be home, I’m going to go out there and play hard. I’m not going to guarantee a championship or anything like LeBron, but just I’m going to try to do all I can to help us win games.”

Aldrich was a high school standout at Bloomington Jefferson in suburban Minneapolis before going on to win a national championship at Kansas. The 7-foot center was the 11th overall pick by Oklahoma City in 2010, but had a hard time finding footing in the league while starting his career with a team that had quickly emerged as a Western Conference power.

”Most lottery picks you go to a team that’s struggling and you usually get your opportunity right away,” he said. ”For me, the opportunity really didn’t come until probably four years into the league. Through that transition you just have to grit your way through it.”

He spent two years in OKC and also played for Houston, Sacramento and New York before delivering his best season as a pro with the Los Angeles Clippers in 2015-16. He emerged as a productive and efficient backup to DeAndre Jordan, and new Timberwolves coach Tom Thibodeau went after him in free agency to provide some much-needed depth behind big men Karl-Anthony Towns and Gorgui Dieng.

Aldrich got a three-year, $22 million contract from the Wolves, but he doesn’t expect the money to change him.

”I’ve been wealthy my whole life. Great family, friends. That’s what it’s all about,” Aldrich said.

He said he had talks about joining Thibodeau in Chicago with the Bulls a few years back and feels uniquely suited to play for a coach who values toughness and defense. Aldrich pointed to a scar over his left eyebrow and then popped out his fake front tooth to serve as his credentials.

”As you can tell, I’ve got a few scars and I’ve got a missing tooth,” he said with a smile. ”It kind of fits the groove. Just exciting to play for him and the organization is going to be a really good few years.”

Aldrich was a freshman in high school when Kevin Garnett led the Timberwolves to the Western Conference finals against the Los Angeles Lakers in 2004. The Wolves haven’t been back to the playoffs since, and the hometown kid wants desperately to be a part of the team that breaks that dubious streak.

”I remember the atmosphere and the excitement,” he said. ”Being in the playoffs this last year and my first few years, just seeing those crowds and knowing what our city would be (like) to have that crowd would be awesome.”