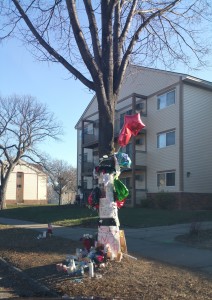 Today marks the one-year anniversary of the fatal police shooting of Jamar Clark in north Minneapolis.

24-year-old Clark was shot and killed in a confrontation with officers Dustin Scharwze and Mark Ringgenberg. The incident set off protests throughout the Twin Cities and in front of the 4th precinct station near where the shooting occurred. And there were more demonstrations when the officers involved in the shooting were cleared of any wrongdoing. Today the Twin Cities Coalition for Justice is planning a vigil at the spot where Clark was shot (5pm).

Other events are scheduled throughout the week and details can be found at the #JusticeThruJamar Facebook page. 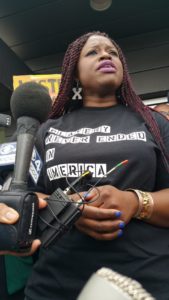 And the former head of the Minneapolis NAACP Nekima Levy-Pounds has posted on Facebook that she’s running for mayor of Minneapolis. Levy-Pounds plans to make an official announcement at a noon press conference  across from the 4th Precinct Police station–not far from the spot where Jamar Clark was shot and killed by police one year ago today. Levy-Pounds has been an outspoken critic of police and city officials in the wake of Clark’s shooting and the shooting of Philando Castile in Falcon Heights.