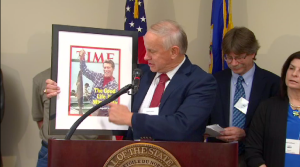 “The whole state needs a transportation bill. Let’s do it!,” said Le Sueur Mayor Bob Broeder — he and other local officials lobbying lawmakers at the State Capitol as the end of the 2016 session nears. Many in the group favor a gas tax increase — the big sticking point between Republicans and Democrats as the clock ticks down. The mayors also want an increase in state aid to cities, saying it will help keep property taxes down. But it appears that cutting state income taxes on Social Security plus other tax credits are higher priorities for House Republicans.  Meanwhile the latest offer in continuing negotiations over a transportation bill landed with a resounding thud at the Capitol today. House Republicans proposed 46 million dollars in immediate new funding for the Corridors of Commerce program in Greater Minnesota, plus a like amount over three years for Township Aid. Democrats fire back it doubles-down on GOP lawmakers’ plan to starve funding for schools and other important programs. Democrats say to address Minnesota’s long-term transportation needs a gas tax increase is necessary. Republicans say, no way. Under two weeks remain in the legislative session.