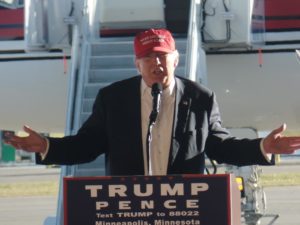 On Sunday, Donald Trump held his first campaign rally in Minnesota since becoming the Republican presidential nominee. Despite Minnesota’s more than 40-year streak of voting Democrat for president, and with Hillary Clinton leading in the polls here, Trump says he can win the state:

Trump said if elected he’ll suspend the Syrian refugee program and “keep radical Islamic terrorists the hell out of our country.”

Bob from Woodbury was one of several thousand supporters attending Sunday’s rally. He says despite accusations about Trump’s treatment of women, the Republican presidential candidate has his support in part because:

Jesse from Minnetonka was wearing a “Hillary for prison 2016 t-shirt:

Trump told enthusiastic supporters that if elected, he’ll repeal Obamacare, make the country safer and bring jobs back to the U-S. This was Trump’s first rally in Minnesota during the election. H also visited the state in August for a fundraiser.

In Minnesota, Trump Offers Voters Chance to Take Government Back from the Corrupt Political Class

**Remarks As Prepared For Delivery**

It’s great to be back in Minnesota today. It was so important for me to come here again and campaign for your vote, I’ve been here many times before — Hillary doesn’t even bother to come here. She refuses to campaign in Minnesota.

Do you really want a President who doesn’t care about your vote?

I am asking for the support of every voter in this state – Democrat, Republican, Independent and first-time voters – who want to take our government back from the Corrupt Political Class in Washington, D.C.

I’m asking for the votes of students, parents, retired Americans, union workers, African- Americans, Hispanic- Americans, and all Americans who are tired of a government that works for Wall Street but not THE PEOPLE.

It is time for all Americans to UNITE and take back our government.

I’m very honored to have won the mock vote of High School Students in Minnesota – this election is all about creating a better future for our children.

Our failed establishment has brought us nothing but poverty at home, and disaster overseas.

We are tired of economic and foreign policies that have BLED THIS COUNTRY DRY.

It is time for REAL CHANGE that puts the people back in charge.

This election will decide who runs this country: the Corrupt Political Class – or YOU, the American People. That’s the choice. She’s with THEM – I’m with YOU. This is our last chance.

It’s just been announced that the residents of Minnesota are going to experience close to a 60% increase in premiums.

Every single county in Minnesota is losing an Obamacare insurer next year.

The Democratic Governor of this great state said “the Affordable Care Act is no longer affordable.”

Premiums are surging, companies are leaving, insurers are fleeing, doctors are quitting, and deductibles are through the roof.

Yet Hillary Clinton wants to double-down on Obamacare, making it even more expensive.

I’m asking for your vote so we can repeal and replace Obamacare and save healthcare for every family in Minnesota.

Hillary Clinton will be under investigation for a long time for her many crimes against our nation, our people, and our Democracy — and likely concluding in a criminal trial.

She is the most corrupt person ever to seek the Presidency of the United States.

My Contract With The American Voter begins with a plan to end government corruption – and to take our country back from the special interests.

I want the entire corrupt Washington establishment to hear the words we are all about to say. When we win on November 8th, We Are Going To DRAIN THE SWAMP.

At the core of my contract is my plan to bring back our jobs.

America has lost one-third of its manufacturing jobs since NAFTA – a deal signed by Bill Clinton and supported by Hillary Clinton.

America has lost 70,000 factories since China entered the World Trade Organization – another Bill and Hillary-backed disaster.

Minnesota ranks fourth nation-wide for the highest share of jobs lost due to our trade deficit with China.

And when Hillary was Secretary of State, our trade deficit with China grew 40 percent.

We are living through the greatest jobs theft in the history of the world.

– Ford laid off 794 workers in Saint Paul and moved their jobs overseas.

– Moneygram laid off 408 workers in Brooklyn Center and moved their jobs overseas.

– Greatbatch laid off 200 workers in Plymouth and moved their jobs to Mexico.

– Smead Manufacturing laid off 592 people in Hastings and moved their jobs to Mexico.

– IBM laid off 500 workers in Minneapolis and moved their jobs to India and other countries.

If a company wants to leave Minnesota, fire their workers, and move to another country, and then ship their products back into the United States, we will make them pay a 35 percent tax.

We will also cancel all harmful Obama regulations that hurt Minnesota farmers, workers and small businesses.

We will become a rich nation once again.

But to be a rich nation, we must also be a safe nation.

Hillary wants a 550% increase in Syrian Refugees pouring into our country and she wants virtually unlimited immigration and refugee admissions from the most dangerous regions of the world.

Her plan will import generations of terrorism, extremism and radicalism into your schools and communities.

When I’m elected President, we will suspend the Syrian Refugee Program – and we will keep Radical Islamic Terrorists out of our country.

Here, in Minnesota, you’ve seen firsthand the problems caused with faulty refugee vetting – with large numbers of Somali Refugees coming into your state without your knowledge, support or approval and with some then joining ISIS and spreading their extremist views.

A Trump Administration will not admit any refugees without the support of the local community where they are being placed.

And we will pause admissions from terror-prone regions until a full security assessment has been performed, and until proven vetting mechanisms have been established.

A Trump Administration will also secure and defend the borders of the United States. And yes, we will build a great wall.

Thousands of Americans would be alive today if not for the open border policies of Obama-Clinton.

There is the tragic case of 90-year-old Earl Olander, a Minnesota Farmer, who was brutally beaten by illegal immigrants and left to bleed to death in his home. Earl’s body was found with his hands bound behind his back in duct tape, and blunt-force injuries to his head. His killers had criminal records, but they did not meet the Obama Administration’s priorities for removal.

A Trump Administration will end this nightmare of violence.

We will stop illegal immigration, deport all criminal aliens, and dismantle every last criminal gang and cartel threatening our citizens.

We will also repeal the Obama-Clinton defense sequester and rebuild our badly depleted military.

I’m honored to have the endorsement of more than 200 top Admirals and Generals and 22 Medal of Honor Recipients.

Hillary and our failed Establishment have spent $6 trillion dollars on wars in the Middle East, and now it’s in worse shape than ever before.

They’ve dragged us into foreign wars that have made us less safe, shipped our jobs and wealth to other countries, and left our borders wide open at home.

We send our troops to foreign countries to defend THEIR borders, but our politicians refuse to defend OUR borders.

That will change on November 8th.

We are going to have the biggest tax cut since Ronald Reagan; we will save and protect your Social Security and Medicare – Hillary Clinton will reduce and cut your Social Security and Medicare benefits; eliminate every unnecessary job-killing regulation; cancel every illegal Obama executive order; protect religious liberty; rebuild our military and take care of our Vets; provide school choice and put an end to common core; support the men and women of law enforcement; save the 2nd amendment; and appoint Justices to the Supreme Court who will uphold and defend the Constitution of the United States.

It is time to cut our ties with the failed politicians of the past.

Hillary Clinton is the candidate of yesterday. We are the movement of the future.

We are fighting for every parent who lost their child to drugs and crime and gang violence.

We are fighting for every community whose jobs and dreams have been ripped out and shipped to other countries.

We are fighting for every American who believes government should serve the people – not the donors, and not the special interests.

I’m asking you to Dream Big – because with your vote, we are just 2 days away from the change you’ve been waiting for your entire life.

Together, We Will Make America Wealthy Again.

We Will Make America Strong Again.

We Will Make America Safe Again.

And We Will Make America Great Again.