You are here: Home / Sports / Twins’ Berrios back to hill tonight vs. KC 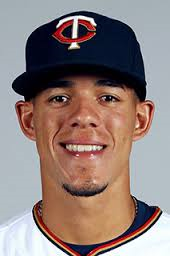 It has not been a smooth rookie season for right-hander Jose Berrios, the Minnesota Twins’ top pitching prospect.

Berrios, who turned 22 in May, starts Friday against the defending World Series champion Kansas City Royals.

Berrios has not pitched since Aug. 11 when he yielded six runs (five earned) and eight hits in two innings in a loss to Houston.

“The last outing was not very well,” Berrios said Thursday on the eve of his eighth career start.

In the extra time between starts, he has been working with pitching coach Neil Allen and bullpen coach Eddie Guardado.

“They helped me a lot,” Berrios said “We throw sides the past ten days, so, we do a couple of adjustments, (on the) release point and rhythm, and so I think I’ll be prepared for tomorrow.”

In his past two starts — both defeats, Berrios surrendered 10 runs, 14 hits and two walks while striking out five in seven innings.

Berrios, a 2012 first-round draft pick out of Puerto Rico, started for the World Team in the 2014-15 Futures Games, pitching a scoreless inning in each. He made four early starts for the Twins, but was demoted after retiring only two Tigers and giving up seven runs May 16.

Berrios pitched well for Triple-A Rochester, 10-5 with a 2.44 ERA, earning an Aug. 1 recall. There is a learning curve for most rookies, even one as talented as Berrios that the Twins hope to build future rotations around.

“Now, I can learn every day and everybody here tries to help me,” Berrios said. “But it’s my first year. I have the ability. A couple of the outings have been rough, but I learn from that. I do adjustments. I keep the good things and the bad things I try to don’t do it again. That’s what I do right now, learn about that.”

Veteran Royals right-hander Edison Volquez, who starts Friday, has a 2-3 record in his previous nine starts, but has pitched at least six innings in eight of them. Volquez is 6-3 with a 4.04 ERA at home this season.

Volquez has a successful history against the Twins, a 5-1 record with a 2.29 ERA in eight career starts and one relief appearance. Volquez is 2-0 with a 2.95 ERA in three starts against them this season, allowing six earned runs in 18 1/3 innings.

The Royals rotation has a 1.61 ERA in a five-game winning streak. Pitching can be contagious, said right-hander Dillon Gee, who allowed one run over seven innings Thursday in the 8-1 victory over the Twins.

“I think so,” Gee said. “I think energy alone is contagious. I think guys feed off each other. Good results tend to feed down. You watch those guys go out and there and put up the games they’ve been putting up. It makes me want to do the same thing and provide for this team like they are.”

The only run off Gee was a leadoff home run to Brian Dozier.

“You just can’t make mistakes to that guy, especially heaters up in the zone,” Gee said. “I was glad I could come back and settle down after that.”

With the club over .500 for the first time since July 22, Gee senses the club kicking into a higher gear to make a bid to return to postseason.

“We’re having a lot of fun right now,” he said. “The guys on the bench are having a blast and keeping it loose. Guys are just having a good time out there and the results are starting to show the way we’ve been playing.”