You are here: Home / Sports / Twins get swept by world champs 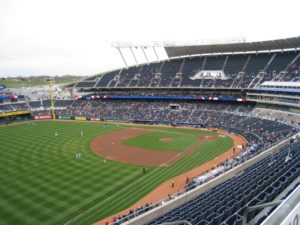 Danny Duffy keeps winning and so do the Kansas City Royals.

The Royals swept a four-game series from the Twins for the first time since 1999 and have their longest winning streak since an eight-game run Aug. 3-11, 2014. The Royals have won 13 of 15 since dthe Rally Mantis showed up in the dugout.

”We all know as a team we can go on some crazy runs,” Hosmer said.

Duffy left after 6 2/3 innings, allowing one run and a season-high eight hits while walking two and striking out four.

”There was a lot of traffic out there,” Duffy said. ”I made some pitches when I had to. When you don’t have your best stuff, you just battle. That’s kind of how I felt today, just get through as many outs as I can and let your defense play behind you. And goodness, didn’t they, the defense killed it out there today. I’m very happy with the way it went.”

He outpitched Twins right-hander Ervin Santana (6-10), who allowed two runs and five hits while striking out 10 and walking one over seven innings.

”They way he’s been pitching the last few games, he’s lights out,” Santana said of Duffy. ”He’s doing his job. He’s doing what he’s supposed to do. He just keeps everybody off balance. He just locates his fastball and his changeup. So, that’s what makes him better today.”

Duffy worked out a no-out, bases loaded jam in the second inning with the help of a couple of fielding gems. After Eddie Rosario struck out, Alex Gordon made a sliding catch of Kurt Suzuki’s fly to shallow left . Third baseman Cheslor Cuthbert snagged Danny Santana’s hard hit grounder and threw out Eduardo Escobar at second base.

”I thought it could have been his best start in this run,” Royals manager Ned Yost said. ”For the simple reason he was really struggling with command of his fastball. When good pitchers don’t have their best stuff, they still find ways to compete at a high level and that’s exactly what Danny did with the help of some great defense.”

Hosmer’s two-out double in the sixth over the head of center fielder Rosario scored Lorenzo Cain, who had an infield single.

Hosmer singled in the second, moved to third on Kendrys Morales’ double and scored on Alcides Escobar’s ground out for the first Kansas City run.

”It’s terrible, man,” Twins second baseman Brian Dozier said to be swept by the Royals. ” We’re playing good, it seems like. These past four games we’ve always make that one mistake and against good teams like Kansas City, it’s not getting people in, bases loaded, nobody out, that’s the ballgame.”

Robbie Grossman and Trevor Plouffe doubled in the third to produce the only run off Duffy.

Kelvin Herrera pitched a perfect ninth to log his seventh save in nine chances.

Twins manager Paul Molitor turns 60 Monday. ”There’s some plans being made for me,” Molitor said. ”I’ll be a willing participant. It’ll be nice to have an off day and do some things with the family. But not celebrate, I’m past that point.”

First baseman Joe Mauer, who is a career .326 hitter with 14 home runs and 111 RBIs against the Royals, went 0 for 12 in the series and was not in the lineup Sunday. He grounded out as a pinch hitter in the ninth.