No. 7 jersey next season, making a swift move to honor the
homegrown player and six-time All-Star who recently retired after a
15-year major league career . 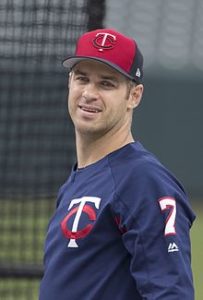 Former Twins 1B Joe Mauer will have his #7 retired next season.

The Twins surprised Mauer with the announcement on Tuesday, while
his accomplishments were celebrated at an all-student assembly at
his alma mater Cretin-Derham Hall High School.

”I enjoyed putting the uniform on every day and being able to put
on the Twins uniform, being at home, meant more to me than you’ll
know,” Mauer said. ”When I take my kids to a game and see No. 7
up there, it’ll probably put a smile on my face every time I see
it.”

Oliva, Hrbek, Blyleven and Kelly entered the gym during the
ceremony. Hrbek, another Minnesota-born-and-raised player who spent
his entire career with the Twins, spoke at the podium inside the
gym and turned to Mauer to reveal the news.

”It’s not every day you have your favorite player growing up
telling you you’re going to go on the wall with him with the
retired numbers,” Mauer said afterward. ”I’m still kind of in
shock right now. Those guys helped me out so much, not only as a
baseball player, but how to conduct yourself as a man and as a
professional.”

In the same place, 17+ years ago, a baby-faced and bespectacled
Mauer signed his first contract with the Twins during a news
conference following their selection of the smooth-swinging catcher
with the first overall pick in the draft. Now, Mauer’s a father of
three children with graying and closely shaved hair, contemplating
the next phase of life at the ripe old age of 35.

”It’s been going well. It’s been fun to be a full-time dad and
help out at home as much as I can,” he said. ”It kind of almost
feels just like a regular offseason. I know there might be some
different feelings and some different emotions come spring
training, but I’m definitely in a good place.”

As for scratching that competitive itch, Mauer has begun to join
some Sunday pickup basketball games at Cretin-Derham Hall, where he
was also a sharpshooting guard and all-state quarterback who had a
full scholarship waiting for him at Florida State had he not picked
baseball.

”I’m going to miss competing, stepping into the box against the
best in the world,” Mauer said. ”I’ll miss that when I’m 60 years
old, so you know you can’t do it forever, but I’m definitely
thankful I was able to do it as long as I did.”

The Twins have yet to determine the date for the jersey-hanging
ceremony for Mauer, who leads their all-time list in doubles (428)
and times on base (3,087) and is second in games (1,858), hits
(2,123) and walks (939). He played 921 games as a catcher, winning
three Gold Glove awards, three AL batting titles, five Silver
Slugger awards and the 2009 AL MVP award, before a concussion
triggered his move in 2014 to first base.

The Twins would love a formal job for Mauer in the future, whether
as an ambassador, consultant or coach as other alumni have taken
on. There’s no rush for now, particularly with Mauer and his wife,
Maddie, caring for month-old Charles at home. He’s being called
Chip for now.

”He’s got a lot to think about,” owner Jim Pohlad said, ”but my
guess is that somehow we’ll connect and there’ll be a role.”