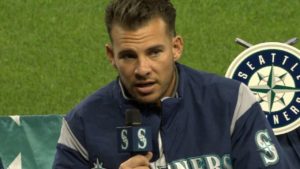 Former Twin Danny Valencia “That’s such a long time ago,” Valencia on his time in Minnesota.

“Valencia, after a slow start to the season, picked it up in May
and is continuing on in June,” said Mariners manager Scott Servais,
whose team will continue its 11-game homestand when the American
League Central-leading Minnesota Twins visit Tuesday night.

After batting just .181 in April with one home run and five RBIs,
Valencia is hitting .348 since, with four home runs and 21 RBIs in
29 games.

“May was good, and hopefully June will be better,” Valencia said.

Valencia matched a career high by driving in five runs Friday in
Seattle’s 12-4 victory over Tampa Bay, and he went 4-for-4 on
Saturday in a 9-2 rout of the Rays.

Singles in his first two at-bats Sunday in a 7-1 victory gave him
nine consecutive hits, tying the team mark set by Raul Ibanez in
2004.

“(Valencia’s) been on fire,” Servais said after the Sunday game.
“When you’re going good, you’ve got to ride it.

“I was sitting next to (hitting coach) Edgar Martinez in the dugout
and somebody asked him if he ever had nine straight hits, and he
couldn’t say that he did. That says a lot.”

Servais said he believes Valencia, who was acquired from the
Oakland A’s in an offseason trade, was pressing too much in April.

“You start taking batting practice in the spring and start trying
to hit them as far as (Robinson) Cano and (Nelson) Cruz,” Servais
said. “Danny’s got home run potential, but it’s more important for
him to be a good hitter. The power comes next.”

The much-traveled Valencia, who is playing for his seventh team
since coming up with the Twins in 2010, admitted as much.

“You always want to come out the gate and show everybody (what you
can do) and want to contribute,” he said. “What’s important is to
trust your abilities. Being here in the clubhouse cements (that you
belong).”

Both Servais and Valencia said the first baseman’s problems in
April stemmed from not using the whole field.

“In spring training and early this year, I didn’t have a good feel
for right field,” Valencia said. “Now I’m able to hit the ball
pretty hard that way.”

As for his memories of Minnesota?

“That’s such a long time ago,” Valencia said. “It was great, a lot
of fun. I played with a lot of guys that were great, veteran
leaders. That was my only time being to the playoffs (as a rookie
in 2010). They told me not to take that for granted.”

Nor is he taking his current streak for granted.

“There’s a lot of luck involved in this game,” Valencia said. “I’ve
got good pitches to hit, and I’m not missing them. I’m just trying
to have a good approach and stick with it.”

Valencia and the Mariners are scheduled to face Twins left-hander
Hector Santiago (4-5, 4.76 ERA) in the series opener. Valencia has
hit .389 in 18 career at-bats against Santiago, who has a 4-3
record and a 3.09 ERA against Seattle. 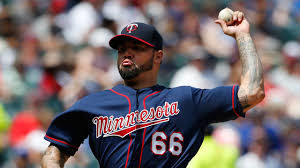 The Mariners are set to counter with left-hander James Paxton (4-0,
1.26). In his first start since being activated from the disabled
list upon his recovery from a left forearm strain, Paxton pitched 5
1/3 scoreless innings Wednesday against the Colorado Rockies. He is
1-1 with a 1.54 ERA in two career starts against the Twins.