You are here: Home / News / U of M English prof defends Dylan getting Nobel Prize for Literature 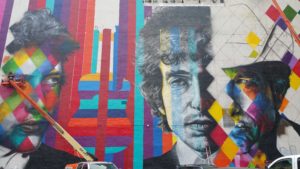 When it was announced that Minnesota’s own Bob Dylan is the recipient of this year’s Nobel Prize in Literature, some academics and writers took to social media to question whether Dylan’s work should even be considered “literature.”

But U of M English professor Ray Gonzalez says “if you go through some of his songs, many of his songs and lyric books, there have been several published, you can pull out the lyrics and set them up as pure poetry and it certainly matches a lot of the important American poets that have published over the last few decades.”

Gonzalez says he’s even used Dylan lyrics in his classes to teach poetry. Dylan, who’s 75, is the first American to win the Nobel Prize for literature in 23 years.