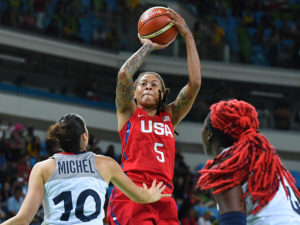 USA’s forward Seimone Augustus (C) of the Lynx jumps for a basket by France’s shooting guard Sarah Michel during a Women’s semifinal basketball match between France and USA at the Carioca Arena 1 in Rio de Janeiro on August 18, 2016 during the Rio 2016 Olympic Games. / AFP / Andrej ISAKOVIC (Photo credit should read ANDREJ ISAKOVIC/AFP/Getty Images)

A 25-8 scoring advantage in the third quarter was the difference-maker for the 2016 U.S. Olympic Women’s Basketball Team (7-0) in its 86-67 win over France (4-3) in the 2016 Olympic Games semifinals on Friday evening at Carioca Arena 1 in Rio de Janeiro.

Diana Taurasi scored six of her game-high 18 points in the third quarter, and she also dished out four assists.

“You’re not going to be able to take someone like that (Sue Bird) out of the lineup and have it just continue to flow smoothly like it did the first six games,” said USA head coach Geno Auriemma about the Americans not having four-time Olympian Sue Bird available due to a sprained knee capsule that was suffered in the USA’s quarterfinal game. “So, we struggled a little bit with it. Our ball movement wasn’t nearly as good, there was a different kind of rhythm, a different kind of flow to our offense. But once we got a little bit comfortable there in the third quarter, we got some separation. We probably needed a game like this under our belt going into Saturday. We found out a lot about what we need to do and what we’re capable of doing.”

The USA outscored France 13-7 over the first five minutes of the second quarter and took its biggest lead of the first half, 32-22, after a layup from Minnesota’s Seimone Augustus with the clock at 5:02. France responded to close the first half by outscoring the USA 14-8, France ended the first half trailing by just four points, 40-36.

“It’s not we were out of sorts,” Taurasi said. “They were really good. Sometimes you got to give credit to the other team. I always say the other team goes to practice, too. They practice their shooting, and their plays, and their defensive rotations and they were on point in that first half. They made us work.”

The USA, which got six points from Minnesota player Maya Moore in the first quarter and seven from Angel McCoughtry in the second, shot 44.4 percent from the field in the first half (16-36 FGs), but that included 0-of-4 shooting from 3-point. France was at 41.2 percent at the midway point, including 3-of-8 from 3-point (.375).

The USA came out with renewed focus after halftime, pushing its lead to 13 points and forcing France to call a timeout at 3:57 with the USA leading 56-43. The first 6:03 of the third period saw the USA get points from six different scorers and two 3-pointers from Taurasi.

The USA defense forced two French shot-clock violations and three more turnovers after the timeout. Meanwhile, Fowles converted a three-point play, Hutchinson native Lindsay Whalen scored three points and Elena Delle Donne converted a three-point play, and the USA led 65-43 with 24.9 seconds left in the third quarter. France made one free throw, and the teams headed into the fourth quarter with the USA ahead 65-44.

“It was definitely tough,” Tina Charles said. “They came out and competed. They wanted to get to the gold medal game just as much as we did. I think our post players did a really great job, especially Syl (Sylvia Fowles) down low.”

The USA scored the first four points of the fourth period, but France rallied behind an 8-0 spurt, and the USA called a timeout at 7:38 with its lead at 17 points, 69-52. After one more score from France, the USA answered with seven straight points before another France run – this time nine points – and the USA called a second timeout up 76-63 with 3:15 remaining in the game.

France never quit fighting, but the USA outpaced France 10-4 over the final minutes to close out the 86-67 win.