After erasing a two-point deficit in the first few minutes of the game to lead by 15 points after the first quarter, the 2016 U.S. Olympic Women’s Basketball Team (2-0) never again was challenged for control during a 103-63 win against Spain (1-1) on Monday afternoon at Deodoro Youth Arena in Rio de Janeiro.

The balanced scoring attack saw five U.S. players reach double-digit scoring and 55 of the USA’s points come off of the bench. The USA’s 40-point win was the first time since 2004 that the U.S. women recorded consecutive 100-point games in Olympic play after setting a U.S. women’s Olympic scoring record with a 121-56 blowout of Senegal on Aug. 7. 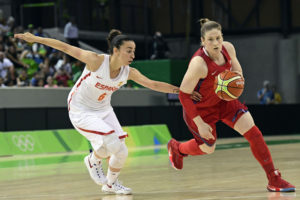 USA’s guard Lindsay Whalen (R) works around Spain’s point guard Silvia Dominguez during a Women’s round Group B basketball match between Spain and USA at the Youth Arena in Rio de Janeiro on August 8, 2016 during the Rio 2016 Olympic Games. (JAVIER SORIANO/AFP/Getty Images)

“We talked about it yesterday,” said USA head coach Geno Auriemma (Connecticut). “Each game we play is going to get progressively harder. We have to keep getting better and it took us a little bit. Spain’s a really good team, but I think when you look at our depth and all the people that we have that can keep the pressure going, after a while it starts to take its toll on the other team.  You could see as we got into the middle of the third quarter and the fourth quarter, it really started to have an effect. I was really happy with it. It’s the third day that we practiced or played, so it’s never easy. So I thought it was good, I thought we did a great job.”

Helped by two 3-pointers, Spain led 8-6 after just 2:48 of play, but the USA put together seven unanswered points to go ahead 13-8 on a 3 from Sue Bird (Seattle Storm) with 5:17 on the clock. After Spain made free throws with 2:59 left in the first quarter, the U.S. advantage was 19-14, but the red, white and blue closed with 3s from Diana Taurasi (Phoenix Mercury) and Elena Delle Donne (Chicago Sky) and four points from Sylvia Fowles (Minnesota Lynx), which put the Americans up 29-14 at the first quarter break.

“We did a good job today,” said Taurasi, who led the USA with 13 points. “We got off to a nice start. We know Spain is a tough team. They have top-flight quality on their team, some of the best players in the world. Defensively, there are some things I think we have to get better at communication-wise. But, overall, I think it was a good step.”

Brittney Griner (Phoenix Mercury) led the way for the USA in the first quarter with eight points and a defensive presence that frustrated Spain’s shooters.

Spain nearly kept pace with the USA in the second quarter, which saw the USA outscore Spain just 25-23, and the score was 54-37 at halftime. While the USA had balanced scoring in the second period, including points from eight different players – led by six points from Angel McCoughtry (Atlanta Dream), Spain made three 3-pointers in the quarter and had a total of nine offensive boards by halftime to keep the USA from putting the game any further out of reach.

“Every game is a tough matchup, even though the score may look like we just blew them out,” McCoughtry said. “Every game is tough. Every team plays hard. Every team is trying to win. It’s always tough. Spain has a good team. They have great players. We just pulled it through, played together, aggressive, got transition buckets. We just have to work on a couple things on defense and rebounding and we’ll be better.”

The USA defense forced seven turnovers out of Spain in the third quarter, and Fowles contributed six of the USA’s 20 points to help the USA go ahead 74-51 heading into the final stanza.

The trend continued in the fourth quarter, which saw the USA outscore Spain 29-12 to secure the 103-63 win.

The top four finishing teams from each preliminary round group advance to the quarterfinals on Aug. 16.