You are here: Home / Sports / US Bank Stadium gets rave reviews from players 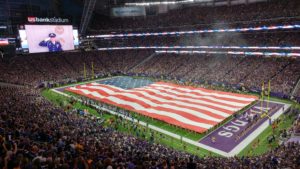 The regular season opening of the Minnesota Vikings’ gleaming new $1.1 billion stadium was truly a grand one, filled with gray-haired legends, white-hot pyrotechnics and some purple rain for good measure.

And noise. Lots and lots of noise.

The Vikings opened U.S. Bank Stadium in earnest on Sunday night with a 17-14 victory over NFC North rival Green Bay, the culmination of a decade-long struggle to replace the drab and dingy Metrodome.

The fixed-roof beauty has already hosted a soccer game, a couple of concerts and two preseason football games. But this was its first truly big moment, with a showdown against the hated Packers in front of a primetime, national television audience serving as the perfect backdrop.

There were more than 20 stars from the team’s proud past in attendance, including the entire Purple People Eaters defensive line that led the Vikings to four Super Bowls in the 1960s and `70s. Hall of Famers Fran Tarkenton, Randall McDaniel and Cris Carter were there, too, and beloved former coach Bud Grant blew the gjallahorn to welcome the team to the field.

”For the first time ever, the best fans have the best stadium,” Carter said during an in-game interview. ”This is the greatest platform we’ve ever had to perform.” 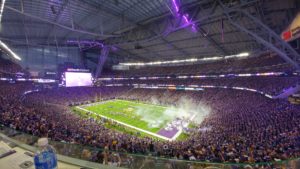 Pregame festivities included a huge party on the commons area in front of the stadium with live music for a crowd of thousands that piled into downtown Minneapolis hours before kickoff. As the game grew closer, the world’s largest pivoting glass doors opened on the west side of the stadium to allow nearly 67,000 fans to stream in, and the Vikings showed a video featuring Thor Bjornsson – The Mountain from ”Game of Thrones” – who helped introduce a new cheer based on an Icelandic war chant.

Commissioner Roger Goodell attended to help celebrate a stadium that got more than $450 million in public money to ensure the team wasn’t lured away to Los Angeles. For the first time in recent memory in Minnesota, there weren’t thousands of cheeseheaded Packer fans from the east who breached the gates and hollered ”Go Pack Go!” during the game.

The Vikings entered the field through six cauldrons that shot bright orange flames toward the roof, quickly answering questions about whether the fancy digs could match that old, claustrophobic pillowcase when it comes to ear-splitting noise.

The Packers were backed up near their own end zone on their first possession of the game, and the full-throated crowd created a din that rivaled anything that was heard at the Metrodome.

”It was awesome. The best environment I’ve ever played in,” Vikings tight end Kyle Rudolph said. ”The crowd was amazing all night.”

Maybe a little too amazing for some. Left guard Alex Boone said the crowd was actually too loud when the Vikings had the ball, which led to some of their penalty problems.

”I’m not saying it’s the fans’ fault, but it would be nice if they would just shut (expletive) up,” Boone said. 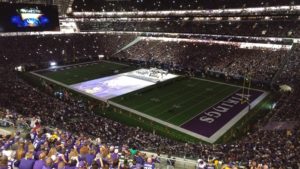 The Vikings asked the NFL for an extended halftime to put on an elaborate show, with the Minnesota Orchestra playing the soundtrack for a highlight video that was projected on to the field. After the video, members of Prince’s band, the New Power Generation, joined the orchestra for a stirring rendition of ”Purple Rain” that culminated with shimmering, purple confetti blanketing the crowd in tribute to the Minneapolis native who died in April.

As fans exited their purple seats after Trae Waynes’ late interception sealed victory for the home team, lights in the ceiling caused the stadium to glow with a purple hue that couldn’t be darkened even by an injury to star running back Adrian Peterson.

”It exceeded my expectations,” Goodell said. ”And you know where you are. You’re in a Vikings stadium. And this is part of the Minnesota community. You can see how it fits into the community walking around the outside. The way they brought the tradition and the history of the team in, I think it’s really incredibly well-done.”