You are here: Home / Sports / US basking in the glow of Ryder Cup win in Minnesota 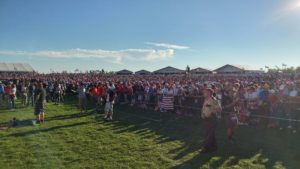 Memo to the 11-member U.S. task force organized to break Europe’s near-chokehold on the Ryder Cup:

You did well. Now take the next couple years off.

But Phil Mickelson is both a tinkerer and a thinker, and he doesn’t figure to leave well enough alone. He’s also the most influential member of the task force, and may tweak a few things for the 2018 Ryder Cup in Paris.

”For us to go to Europe and try to win the Cup is a whole different feat,” Mickelson said. ”That’s going to require a whole different level of play, of solidarity, of fortitude and we are going to have to build on this in two years if we want to try to retain the Cup.”

Europe’s dominance dating to 1985 remains impressive: they still claim six of the last eight and eight of the last 11 Ryder Cup wins. Worse yet for the Americans, they haven’t won on foreign soil since capturing the Cup in 1993 at The Belfry in England.

And that has Lefty thinking a bit.

”The thing about this is that we need to build on this,” Mickelson said. ”Otherwise it’s all for naught.”

Some other takeaways from the U.S. win: 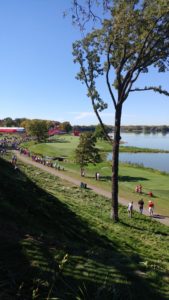 NEXT U.S. STAR?: When the task force does get back to work, its No. 1 priority should be to find more guys like Patrick Reed. Dubbed ”Captain America” by his teammates, the 26-year-old Texan went 3-1-1 in the event, capping his performance by staring down McIlroy, Europe’s top player, in the critical opening singles match that delivered some thrilling shots from both players on the front nine.

Reed’s gutsy showing in all five matches was exceeded only by his bravado. After Tiger Woods, serving as a vice captain, told Reed he’d likely be held out for one of those sessions, Reed replied, ”You’re not sitting me for any matches.”

Convinced, Woods pushed captain Love to use Reed – who went 3-0-1 as a rookie two years ago – and partner Jordan Spieth in Saturday’s final slot. They responded with a third win over the tough European pair of Henrik Stenson and Justin Rose.

NEXT EUROPEAN STAR?: Thomas Pieters took his first Ryder Cup swings with a stocking cap on his head on Friday morning. It didn’t take him long to get really comfortable.

Pieters went 4-1-0 at Hazeltine, the best debut performance ever for a European. Three of those wins came when he was teamed with McIlroy, giving Europe a solid foundation heading into the next Ryder Cup and possibly for years after.

”I’ve got a partner beside me for the next 20 years,” McIlroy said with a smile, putting his arms on Pieters’ shoulders. ”I’m not letting anyone else have him.” 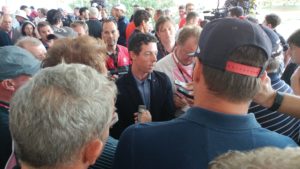 McIlroy talks to reporters after event

FAN BEHAVIOR: A record crowd of more than 50,000 packed Hazeltine for all three days of the event, including some fans who shouted vulgar and obscene things at some of the Europeans. One was removed from the course after an exchange with McIlroy.

But the players and captain Darren Clarke commended the U.S. team for helping police the crowds and said ”99.99 percent” of the fans were exceptional all weekend. McIlroy was asked if the American team should expect similar treatment from European fans in 2018, when the Ryder Cup will be on the line in Paris.

”We wouldn’t encourage any sort of retaliation,” McIlroy said. ”That’s not who we are. That’s not what we do. There won’t be. And we’ll be making that clear.”

NOT YOUR AVERAGE SPECTATORS: One way to gauge how much the U.S. win meant: Few people were more emotional about it than Woods and Bubba Watson – and neither hit a shot. Instead, they put their egos and games on hold and served the team as vice captains

”Being a part of the team – didn’t actually hit a golf shot, but to go out there and be with these guys, we are truly a team,” Woods said. ”And we have that mindset coming here with our captain and we did it, we accomplished it and we won it together.”

”This is the greatest thing I’ve done in golf,” said Watson, who owns two Masters green jackets. ”This team was amazing. They took me in their arms and let me be a part of it.”

Woods generally kept a low profile, but convinced Love to put Reed and Spieth back on the course for a fourth consecutive match late Saturday. Reed made the decision look smart with seven birdies and an eagle on his own ball to seal the third win over the Rose-Henrik duo.

”He’s the reason why I got my point today,” Snedeker said. ”He was in my ear all day.”