You are here: Home / News / USPS rolls out first-ever Halloween-themed stamps today in Anoka (with AUDIO) 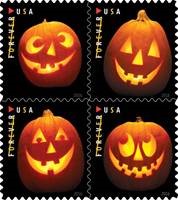 More evidence supporting Anoka’s claim as Halloween Capital of the World, when the U-S Postal Service rolls out its first-ever Halloween-themed stamps this morning in that east-central Minnesota community. Anoka booster Bart Ward says they’ve had three congressional proclamations plus an on-line survey, when Anoka beat out Salem, Massachusetts and Hells, Michigan.  Ward says, “People from all over the country vote via Internet for about five days, and Anoka happened to win that one. We were really surprised, ’cause some of these other towns, particularly Salem,… [are] bigger than ours.”

Anoka has three parades before Halloween — the largest of which rivals the Aquatennial and Saint Paul Winter Carnival parades in attendance.  “It just depends upon weather,” Ward says. “There’s some times when Anoka Halloween Parade is the largest parade in the five-state area.”  He says up to 50 thousand people turn out for the event.

In the spirit of Halloween, the U.S. Postal Service issues these delightfully eerie stamps featuring photographs of four different jack-o’-lanterns. These creatively carved pumpkins have been symbols of Halloween in the United States since the late 19th century, not long after celebrations of the holiday began here. These stamps are the first Halloween-themed stamps to be issued by the U.S. Postal Service. The jack-o’-lanterns were carved by Paul Montanari and photographed by Sally Andersen-Bruce. The stamps were designed by art director Derry Noyes.

The dedication event will include notable speakers, music, involvement from local schools, an autograph session, a display of city and Postal Service vehicles, plus a selfie station for those who would like to take selfies and tweet/post them to social media with #Halloweenstamps. Stamp collectors and all in attendance will have the opportunity to purchase the Jack-o’-lanterns Forever® Stamps and First-Day-of-Issue collectible envelopes – postmarked on the spot.