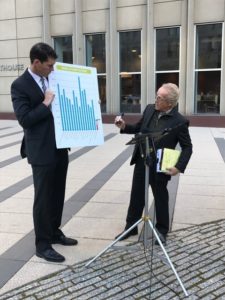 Victims’ attorney Jeff Anderson says a new plan by Archdiocese of Saint Paul and Minneapolis still doesn’t do enough to compensate priest sex-abuse survivors, because church officials are hiding the truth about their ability to pay.  Anderson says the plan, “instead of putting the survivors first, puts the archdiocese first and the insurance companies second, and then the survivors last in line.”  Archdiocese attorney Charles Rogers responds there’s “no other asset that hasn’t been brought forward.”

Rogers says to go with another plan will put survivors in legal battles with insurance companies.  He says “then there would be an assignment of rights of recovery under those policies, and all that would be ensured is years upon years of litigation.”  Victims’ attorney Anderson responds, “The assertion that it will result in years and years of litigation will only be because it was the archdiocese that chooses not to tell the truth, to disclose their assets and to work with the survivors.”

The archdiocese’s plan needs approval of both the victims and the court.