You are here: Home / Vikings / Vikes and Bears to Square Off on Sunday

(Minneapolis, MN)  —  For the fourth time in the past five years, the
Chicago Bears will visit the Minnesota Vikings in the last game on
the schedule.

For once, this matchup has some meaning.

The Vikings, having already ceded the NFC North title to the Bears,
have yet to secure a spot in the playoffs. The Bears could still
improve their seed and snag that coveted first-round bye, if they
win and the Los Angeles Rams also lose at home to San Francisco. 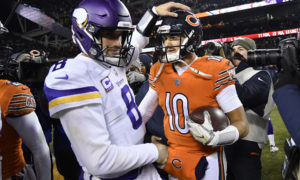 ”We understand what’s at stake. There’s no magic formula. There’s
no button you can push or hours you can put in to suddenly snap
your fingers and guarantee a win,” Vikings quarterback Kirk
Cousins said. ”You do all you can, give everything you have.”

Last season, though the Vikings needed the victory to secure the
second seed in the NFC and the first-round bye , they had clinched
the division two weeks earlier while the Bears were bound for last
place in the division.

The year before that, the biggest drama was the pair of repelling
oil pipeline protesters who sneaked past security to climb up a
truss connected to the roof and unfurl a large banner as they
lowered themselves from the ceiling. Both the Bears and Vikings had
already been eliminated from contention.

In 2014 at TCF Bank Stadium, the Vikings wrapped up their first of
two years outside during the construction of U.S. Bank Stadium with
a win over the Bears that determined they’d finish third in the NFC
North and not fourth.

The two teams did this play-out-the-string thing twice in recent
memory at the Metrodome, too. Both teams were eliminated before the
2011 finale, too, when the Bears stopped a five-game losing streak
to finish at .500. In 2005, with the Bears resting most of their
starters with the division already clinched, a victory by the
Vikings wasn’t enough to keep coach Mike Tice from being fired
after the game .

Well, finally, these rivals have entered their 2018 season closer
in the right positions for a tension-filled game on Sunday.