You are here: Home / Sports / Vikings add OL depth with signing of Long 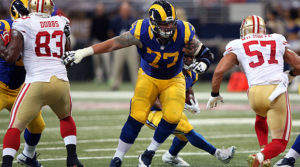 Jake Long when he played for the Rams

Jake Long was just waiting for that call from an NFL team, confident his right knee was healthy again and thus frustrated to be out of action.

The Minnesota Vikings, with both a former coach and quarterback of Long’s as a bonus, finally checked in on the other end of the line.

”I know the type of player that I am, and I’ve still got a lot of football left,” Long said Tuesday after his first practice with the team, taking most of his turns at left tackle. ”It was frustrating, but like I said, I kept my head down, rehabbed, worked out every single day and knew a call would come eventually, and it finally did.”

Minnesota also placed right tackle Andre Smith on injured reserve, with surgery required on his damaged right triceps. Left tackle Matt Kalil is already on injured reserve following surgery on his right hip, and T.J. Clemmings has had his struggles filling in. Jeremiah Sirles has taken over for Smith.

Right guard Brandon Fusco was held out of practice on Tuesday, too, before the players left for their bye week. He left the 31-13 victory over Houston on Sunday with a concussion and was replaced by Zac Kerin.

The Vikings badly needed some help, and the 31-year-old Long was a natural fit as a four-time Pro Bowl pick and All-Pro selection in 2010. The first overall pick in the 2008 draft out of Michigan, Long played his first five NFL seasons for Miami. The first four were under coach Tony Sparano, who is now offensive line coach in Minnesota. Then Long signed with St. Louis, where he spent two years with quarterback Sam Bradford, who’s now running the offense for the Vikings.

Long and Bradford tore their ACLs in both 2013 and 2014, ruining consecutive seasons for each of them. Long was released and eventually signed with Atlanta, for whom he appeared in four games as a reserve last year. Bradford was traded to Philadelphia last year and then to Minnesota last month.

”My body feels great right now,” Long said. ”Honestly, this is the best I’ve felt in a long time. I’m about two years out from my ACL, so really had time to heal. My whole body’s had time to heal. I feel great.”

The concepts and terminology under offensive coordinator Norv Turner will be new, but the blocking scheme with Sparano will be familiar. ”Luckily we’ve got the bye week,” Long said, ”and I can really get in the playbook and spend some time with him and learn everything.”