You are here: Home / Sports / Vikings are undefeated

The quarterback, running back and left tackle are all out, likely for the whole season.

The Minnesota Vikings have been playing as if nobody’s missing at all. 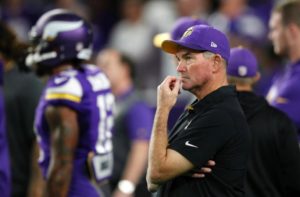 ”In the NFL,” coach Mike Zimmer said, ”it’s adapt or you get eaten up.”

Injuries are a given in this game, so overcoming the loss of key players is hardly a novel accomplishment.

The Vikings (4-0) have only finished the first quarter of the schedule, so their replacements have much more to prove over the long haul that they can render moot the absence of Teddy Bridgewater, Adrian Peterson and Matt Kalil.

The way this team has responded to these potentially devastating setbacks, though, is the type of trait that title contenders possess.

”I say it all the time, because it’s true about this football team. It’s so important to have the right kind of guys in here,” Zimmer said. ”Guys that when it gets down to it, we fight.”

The damage to Bridgewater’s left knee that occurred in practice on Aug. 30 caused widespread consternation, but once the Vikings were able to visit with the popular quarterback they loosened up a little.

The trade for Sam Bradford was made only four days later, an instant pick-me-up for the players that signaled the organization was still serious about chasing that elusive championship.

Bradford was playing so well in his debut on Sept. 18 against the rival Green Bay Packers that the departure of Peterson with damage to his right knee wasn’t as demoralizing as it could have been.

Jerick McKinnon and Matt Asiata fared relatively well filling in with Peterson out in 2014 while the child abuse case against the star running back played out.

Plus, the defense has reached a new height of dominance, in its third year under Zimmer.

The news, then, that Kalil would need season-ending surgery on his right hip became almost an afterthought at that point.

The left tackle is crucial in the protection plan, frequently facing the opponent’s best and fastest pass rusher, but Kalil had clearly been struggling through the injury at less than full strength. T.J. Clemmings, who started at right tackle as a rookie last season, has held his own over the past two games. 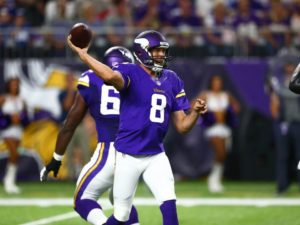 Bradford, who has yet to turn the ball over, has shown a quick release, an accurate touch and ample strength to throw deep.

He has especially been confident in throwing the ball to his most-trusted options, wide receiver Stefon Diggs and tight end Kyle Rudolph, in heavy traffic that Bridgewater was less willing to test.

The Vikings beat the New York Giants 24-10 on Monday behind their most-balanced offensive production to date in 2016, rushing for a season-most 104 yards.

”This is the first game where the offense scored all the points,” Rudolph said.

”We finally were able to get things rolling on offense and let them just worry about stopping people and not scoring, too.”

Peterson led the league in rushing last season, but for whatever reason he hasn’t been as dominant since the 2012 season when he won the NFL MVP award.

He’s long been more comfortable lining up deep in the backfield, but Bridgewater and now Bradford are more effective in the shotgun or pistol formations.

Peterson is the type of power runner who has often thrived off wearing a defense down over the course of a game, a potentially limiting factor for the play calling with that temptation of his potential to break loose for a long gain at any time.

The run blocking was poor over the first three games, so the low production wasn’t necessarily a sign that Peterson has slowed down.

But McKinnon’s versatility of style, plus a superior ability as a pass-catcher and pass-protector, just might be a better fit. Asiata is a capable complement for short-yardage situations, too.

The defense’s success is serving as quite the support, too.