You are here: Home / Sports / Vikings back to practice today 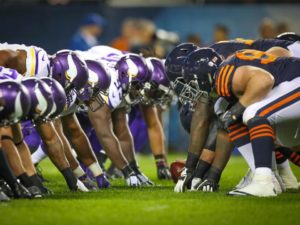 The bye week is usually met with eagerness by NFL teams, that rare in-season opportunity to let the body heal and rest and give the mind a brief break from the game-planning and pressure to win.

The Minnesota Vikings might as well have passed on theirs this year. They sure didn’t put it to good use.

After taking the league’s only perfect record into the week off, looking every bit the Super Bowl contender they’ve been gearing up to be, the Vikings have been dismantled in consecutive defeats by Philadelphia and Chicago on the road.

Both the Eagles and Bears used heavy pressure on quarterback Sam Bradford and clogged rushing lanes when the Vikings handed off the ball, stymieing an offense that was far from dominant in the first five games but confident, crisp and efficient enough to complement the dominant defense.

The Eagles have emerged among the NFC’s early-season elite, so that one wasn’t such a stunner. The Bears, though, took one victory into the game on Monday night and racked up 403 total yards, the most allowed by the Vikings this year. That included 158 yards rushing.

As unexpected and, for a playoff-caliber team, inexcusable as this more-lopsided-than-the-score-indicated 20-10 loss was, the context and timing of the contest were not exactly in Minnesota’s favor. As bad as the Bears had played before this, they had 10 days to prepare for a division foe. They also benefited from a fresh Jay Cutler, all but on his way out as the franchise quarterback with nothing to lose and a mind to prove his worth on a prime-time stage.

Cutler is 9-5 in 14 career starts against the Vikings, his most victories against any team, including a sparkling 7-1 at Soldier Field. Coach Mike Zimmer offered scant insight about his team’s performance in a terse postgame news conference, keeping his comments to a mere three minutes, but he credited Cutler for his play.

”We didn’t make any plays. They made them all,” Zimmer said.

Last season, the Vikings ended a couple of ignominious losing streaks, but they’re still 2-14 on the road against Chicago since 2000 and 1-8 in their last nine Monday night games regardless of site. The coaches and players have changed, of course, but fans don’t forget the Vikings are 10-21 in night games over the last decade.

Success for NFL teams is as much about minimizing flaws as it is about seizing opportunities presented by the opponent’s weaknesses, and the Vikings have done an awful job of this for two straight weeks.

The offensive line is squarely in the spotlight right now, with struggles at every position, particularly tackles T.J. Clemmings and Jake Long. The Vikings have allowed 11 sacks over the last two games, and Bradford has thusly been largely out of sync. 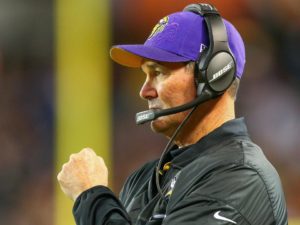 ”We haven’t proven it yet. So I don’t know if hopeful’s the right word, right this second,” Zimmer said when asked if he was optimistic about a rebound by the offensive line. ”We’ve got to get it fixed, though.”

Bradford wasn’t about to blame the blockers. He overthrew Stefon Diggs, a pass that would’ve been a 50-yard touchdown late in the first quarter after his best wide receiver badly beat Bears cornerback Tracy Porter on the route.

”Regardless of what’s going on up front, I have to figure out a way to move the football down the field,” Bradford said.

The Vikings host another division foe, Detroit, this weekend.

”We just have to figure the way we did it, what the formula was those first five weeks, and do it,” Bradford said.